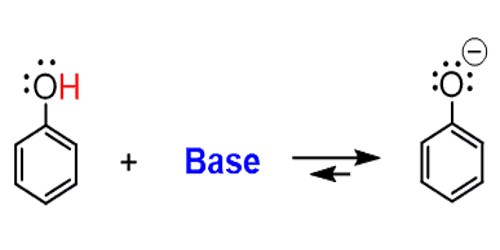 A base is a substance that reacts with an acid in an acid-base reaction. It is a substance that can accept a hydrogen ion (H+) from another substance. A chemical can accept a proton if it has a negative charge, or if the molecule has an electronegative atom like oxygen, nitrogen, or chlorine that is rich in electrons. A base is the opposite of an acid. Like acids, some bases are strong and others are weak. The weak bases are less likely to accept protons, while the strong bases quickly take protons in solution or from other molecules. An acid is a base’s “chemical opposite”. An acid is a substance that will donate a hydrogen atom to the base. Bases differ from acids in their potential for accepting rather than releasing hydrogen ions. Types of bases include Arrhenius base, Bronsted-Lowry base, and Lewis base.

Chemicals were bases due to their observable properties. In this respect, bases were substances that tasted bitter, were slippery and turned litmus dye from red to blue. Bases have these characteristics:

Properties of a Base

A base displays several characteristic properties:

Some common household products are bases. For example, caustic soda and drain cleaner are made from sodium hydroxide, a strong base. Ammonia or an ammonia-based cleaner such as windows and glass cleaner is basic. These stronger bases may cause skin irritation. Other bases, like cooking ingredients sodium bicarbonate (baking soda) or cream of tartar, are basic, but these are not harmful and suitable for cooking.

Gloves should always be worn when handling bases. If skin irritation is encountered, the affected area should be rinsed thoroughly with cold water. If that does not stop the problem, contact medical help as soon as possible.

A strong base is a base that gives off a hydroxide ion, OH–, when putting in water. There are eight of them.