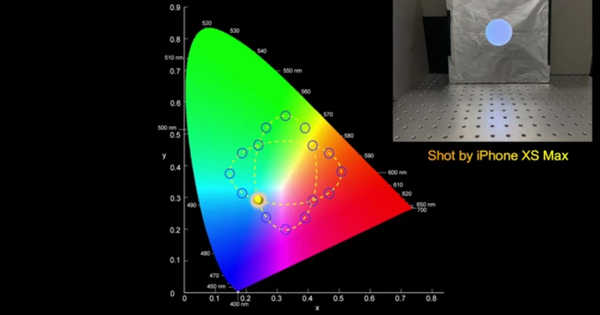 Researchers describe a novel approach to color digitization. It can be used to fine-tune the color of LED lighting and can be applied to cameras and displays, including those used in computers, televisions, and mobile devices.

If you’ve ever tried to photograph a sunset with your smartphone, you’ll know that the colors don’t always match what you see in person. Researchers are getting closer to resolving this issue thanks to a new set of algorithms that allow them to record and display color in digital images in a much more realistic manner.

“When we see a beautiful scene, we want to record it and share it with others,” said Min Qiu, director of Westlake University’s Laboratory of Photonics and Instrumentation for Nano Technology (PAINT). “However, we do not want to see a digital photo or video with incorrect colors. Our new algorithms can assist developers of digital cameras and electronic displays in better adapting their devices to our eyes.”

Researchers describe a new approach for digitizing color. It can be applied to cameras and displays – including ones used for computers, televisions, and mobile devices – and used to fine-tune the color of LED lighting.

Qiu and colleagues describe a new approach for digitizing color in Optica, The Optical Society’s (OSA) journal for high-impact research. It can be used to fine-tune the color of LED lighting and can be applied to cameras and displays, including those used in computers, televisions, and mobile devices.

“Our new approach can improve today’s commercially available displays or improve the sense of reality for new technologies like near-eye displays for virtual reality and augmented reality glasses,” said Jiyong Wang, a member of the PAINT research team. “It can also be used to create LED lighting that closely resembles natural sunlight for hospitals, tunnels, submarines, and airplanes. This can help regulate circadian rhythms in people who do not get enough sunlight, for example.”

Digital colors, such as those on a television or smartphone screen, are typically created by combining red, green, and blue (RGB) values. A RGB value of (255, 0, 0) represents pure red, for example. The RGB value represents the relative mixing ratio of three primary lights generated by an electronic device. However, because not all devices produce this primary light in the same way, identical RGB coordinates can appear to be different colors on different devices.

Colors can also be defined in other ways, or color spaces, such as hue, saturation, value (HSV) or cyan, magenta, yellow, and black (CMYK). To allow color comparisons across different color spaces, the International Commission on Illumination (CIE) issued standards for defining colors visible to humans based on our eyes’ optical responses. When designing and calibrating electronic devices, scientists and engineers must convert digital, computer-based color spaces such as RGB to CIE-based color spaces.

“Our new method directly maps digital signals to a CIE color space,” Wang explained. “Because such a color space is not device-dependent, the same values should be perceived as the same color even if they are displayed on different devices. Other important color properties, such as brightness and chromaticity, can also be treated independently and precisely using our algorithms.”

The researchers put their new algorithms to the test with LEDs and lasers in lighting, display, and sensing applications. Their findings were very consistent with their expectations and calculations. They demonstrated, for example, that chromaticity, a measure of colorfulness independent of brightness, could be controlled with a deviation of only 0.0001 for LEDs and 0.001 for lasers. These values are so small that most people would not notice any color differences.

According to the researchers, the method is ready for use with LED lights and commercially available displays. However, in order to achieve the ultimate goal of reproducing exactly what we see with our eyes, additional scientific and technical problems must be solved. Color sensors in a digital camera, for example, would need to respond to light in the same way that photoreceptors in our eyes do in order to record a scene as we see it.

To expand on their findings, the researchers are employing cutting-edge nanotechnologies to improve the sensitivity of color sensors. This could be used in artificial vision technologies to aid colorblind people, for example.