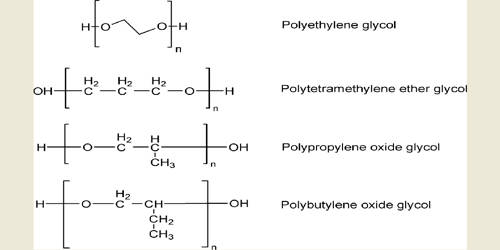 A polyol is an organic compound containing multiple hydroxyl groups. It plays a key role in the production of polyurethanes. It is one of the major components in polyurethane production. The term “polyol” can have a slightly different meaning in food science and polymer chemistry. A molecule with more than two hydroxyl groups is a polyol, with three – a triol, and with four – a tetrol. These made from oligosaccharides are either not digested or slowly and incompletely digested. By convention, polyols do not refer to compounds that contain other functional groups. It contains reactive hydroxyl (OH) groups which react with isocyanate (NCO) groups on isocyanates to form polyurethanes. It can be synthesized through transesterification of vegetable oils with other polyols or alcohols, producing fatty acid polyol mono- and di-esters. The main organic oxide utilized are Ethylene Oxide, Propylene Oxide, Butylene Oxide, Epichlorohydrin.

Low molecular weight polyols are widely used in polymer chemistry, where they function as crosslinking agents. Polyols used in the production of commercial alkyd resins are glycerol, trimethylolpropane, and pentaerythritol. Polyesters are a class of polymers that allows for enormous variation of structural and property design.

The preparation of metal nanoparticles often employs the “polyol method.” In such cases, the polyol is usually a long chain diol such as hexadecanediol ((CH2)16(OH)2). By modifying the PU raw materials or changing the catalyst, polyether performance can be modified. These initiators include diethyl alcohol, ternary alcohol, tetrahydrofuran, and aromatic polyether polyols, etc.

Since the generic term polyol is only derived from chemical nomenclature and just indicates the presence of several hydroxyl groups, no common properties can be assigned to all polyols. The performance characteristics of polyurethanes are sometimes modified with a variety of additives, to increase, for example, strength, rigidity, or flexibility. However, thy are usually highly viscous (when polymeric) to solid at room temperature.