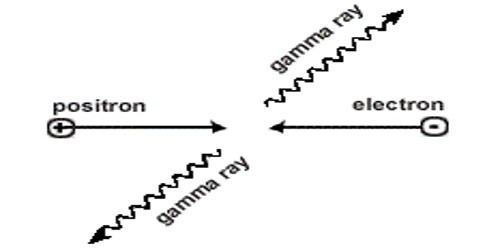 A positron (also called an antielectron) is the antimatter version of an electron. It is a particle of matter with the same mass as an electron but an opposite charge. It has the same mass and spin as an electron. They are the antiparticles of electrons. However, it has a positive electric charge, whereas an electron has a negative charge. Like all antimatter, when it meets its so-called counter partner, each is annihilated and turned into energy. It has the same properties as the electron with the exception of electric charge – the electron has a negative charge while the positron has a positive charge. The electron and positron disappear, and the total mass decreases. There is no name for this type of energy, as it is neither mechanical, radiation, chemical, electrical, nuclear, nor thermal. Although the energy does emit light photons when annihilated, it is converted from some form of energy that has not been named. However, when a positron meets an electron, the two particles annihilate into a flash of energy. It was discovered in 1933 by the American physicist Carl Anderson.

A positron also very rarely makes a structure called positronium. It is a form of antimatter because, when a positron encounters an electron, the two completely annihilate to yield energy. Positronium is like an atom in many ways but is very unstable, and usually quickly annihilates. It was the first example of a particle predicted to exist by quantum mechanics that was later discovered to actually exist. When kept separate from matter, positrons can exist forever.

Today, positrons have numerous applications in particle physics research and medical imaging techniques. They are important in a medical technology called positron emission tomography (PET), which is especially useful in the brain and nervous-system scanning. The PET technique allows for the visualization of biological processes and systems such as blood flow, metabolism and neuron receptors.