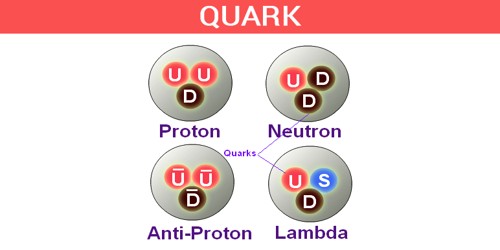 A quark is any of a group of subatomic particles believed to be among the fundamental constituents of matter. It is a tiny particle that makes up protons and neutrons. Atoms are made of protons, neutrons, and electrons. It was once thought that all three of those were fundamental particles, which cannot be broken up into anything smaller. After the invention of the particle accelerator, it was discovered that electrons are fundamental particles, but neutrons and protons are not. Neutrons and protons are made up of quarks, which are held together by gluons.

Quarks are never observed in isolation, only in pairs or triplets. When quarks are stretched farther and farther, the force that holds them together becomes bigger. When it comes to the point when quarks are separated, they form two sets of quarks, because the energy that is put into trying to separate them is enough to form two new quarks. Protons and neutrons are familiar examples of such composite objects — both are made up of three quarks.