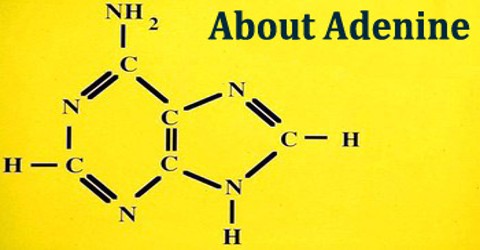 Adenine is a nucleobase, which is an important building block for life. It is one of four nitrogenous bases found in deoxyribonucleic acid (DNA) and ribonucleic acid (RNA). DNA and RNA contain the genetic code of every living creature including humans, plants, animals, fungi, and many microorganisms. Adenine helps to stabilize the nucleic acid portion of these molecules. Additionally, adenine is found in adenosine triphosphate (ATP), a molecule that carries the energy needed for work in cells. DNA and RNA are extraordinarily important nucleic acids because they contain the genetic information used for the growth, repair, development, and reproduction of all organisms. They are each made up of four nucleobases: DNA is composed of adenine, thymine, guanine, and cytosine; RNA is composed of the same, but with uracil instead of thymine. The arrangements of these nucleobases determine the exact nature of the genetic code contained in the DNA or RNA. Adenine is one of these nucleobases, so it is of the utmost importance to the genetic structure of all living organisms.

Adenine in DNA and RNA

In DNA, adenine bonds only to thymine. It does so with two strong hydrogen bonds, so the bond is difficult to break and the code is difficult to damage. In RNA, adenine bonds with uracil; the particular kinds of reactions that RNA is involved in favor uracil to thymine. In both cases, the particular arrangement of nucleobases determines the genetic properties of the nucleic acid. It was initially thought that Adenine was actually vitamin B4. It is not considered to be a direct part of the B vitamin family anymore, though some B vitamins do bind with it with varying effects. This is most notably true of niacin and riboflavin, which bind with it to form cofactors, which are required for some proteins to function properly.

Adenine is not exclusively found in nucleic acids; many different substances, such as some blends of tea, actually contain the nucleobase. It can also form a variety of compounds that are very common in nature and in some foods and drinks. Cobalamim, more commonly referred to as vitamin B12, is actually a compound of adenine known for its energizing effects and is a natural antidepressant. Adenosine triphosphate (ATP) is another compound that contains adenine; it is known for its role as a major energy source that is derived from cellular respiration. Glucose is broken down into ATP, which is a very significant energy-containing molecule used by a vast variety of organisms.

Structure and Function of Adenine

Adenine is a molecule made of carbon, nitrogen, and hydrogen atoms. Its chemical formula is C5H5N5.