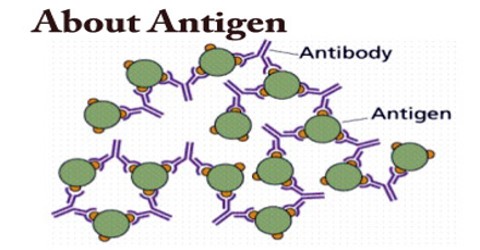 Antigen is capable of stimulating an immune response, specifically activating lymphocytes, which are the body’s infection-fighting white blood cells. Antigens may be soluble substances, such as toxins and foreign proteins, or particulates, such as bacteria and tissue cells; however, only the portion of the protein or polysaccharide molecule known as the antigenic determinant combines with antibody or a specific receptor on a lymphocyte. The antigen may originate from within the body (“self-antigen”) or from the external environment (“non-self”). The immune system usually does not react to self-antigens under normal homeostatic conditions due to negative selection of T cells in the thymus and is supposed to identify and attack only “non-self” invaders from the outside world or modified/harmful substances present in the body under distressed conditions. Antigens are mainly microbes such as bacteria, parasites, and fungi. They can also come from the environment, such as viruses, chemicals, pollen, and more. Each antigen may cause infection to the body. There are some antigens that seem harmless but still cause the immune system to respond, like pollen for example. These are called allergens.

When antigens enter the body, the immune system alarm is triggered. The first line of defense is for the B-lymphocytes, or B cells, to be sent out. These are special leukocytes, also called white blood cells. Their job is to tag the antigen so that the correct response can be made.

B cells hang out in bone marrow waiting for antigens to enter the body. When an antigen like bacteria enters the body, the B cells will leave the bone marrow and seek out the bacteria antigen. The B cells recognize if the antigens belong to the body or if it is an intruder.

When the B cells tag the intruding antigen, it will also create special proteins, antibodies that lock onto the antigen. This also sends chemical signals to the rest of the immune system. After the B cell finishes its job, the T cells take over and begin to destroy the antigen. T cells may need help from the cleanup crew, phagocytes. Phagocytes are another type of white blood cell. Their job is to chew up and eliminate the antigen all together. Antigenic determinants or epitopes are components of antigen. Each antigen carries many epitopes. Each Y-shaped antibody mol­ecule has atleast two binding sites that can attach to a specific epitope on an antigen. An antibody can also bind to identical epitopes of two different cells at the same time which can cause neighbouring cells to aggregate. Antigens combine with the antibody. The combination is very much like the lock and key analogy.

Types and Function of Antigen There are three types of antigen presenting cells in the body: macrophages, dendritic cells and В cells.

Macrophages: Macrophages are usually found in a resting state. Their phagocytic capabilities are greatly increased when they are stimulated to become activated macroph­ages. The macrophages are present alongwith lymphocytes in almost all the lymphoid tissues, e.g., monocytes as blood macrophages and histocytes as tissue macrophages.

Dendritic Cells: These cells are characterized by long cytoplasmic processes. Their primary role is to function as highly effective antigen-trapping and antigen presenting cells. These cells are nonphagocytic in nature. They are found in lymph nodes, spleen, thymus and skin.

B-cells: В-cells express on their surface intra-membrane immunoglobulin (Ig) mol­ecules that function as В cell antigen receptors. Since all the receptors on a single В cell are identical, each В cell can bind only one antigen. This makes them much more efficient antigen-presenting cells than macrophages, which must ingest any foreign material that comes their way. Antigens are the moieties recognized by antibodies. Antigens can come from the environment, or in the case of autoimmune disorders, can be a component of one’s own cells and/or tissues. Antibodies are immune molecules that recognize and bind to antigens. Binding of an antigen by an antibody, in general, targets the antigenic molecule for destruction.

Antigens are foreign particles, usually proteins, which are capable of generating an immune response in the body, a property known as immunogenicity. This immune response consists of specific antibodies which are generated by plasma cells as a result of exposure to a specific epitope presented by the antigen. The antibodies are released in the blood stream and bind selectively to the epitope present on the foreign antigen, thus marking it for elimination from the body.