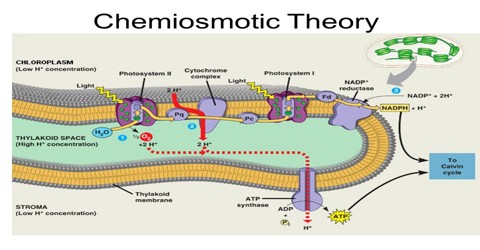 Chemiosmotic is relating to or being a hypothesis that seeks to explain the mechanism of ATP formation in oxidative phosphorylation by mitochondria and chloroplasts without recourse to the formation of high-energy intermediates by postulating the formation of an energy gradient of hydrogen ions across the organelle membranes that results in the reversible movement of hydrogen ions to the outside and is generated by electron transport or the activity of electron carriers. Chemiosmotic Theory actually explains that, how ATP is generated in the mitochondria via the electron transfer chain (ETC). ETC is an oxidative phosphorylation reaction takes place in the inner membrane of the mitochondria. It begins with NADH and FADH2 that looses electrons. These electrons are transferred along the chain. As each complex accepts electrons and passes it on, energy is released. This energy is used to pump the protons move against the concentration gradient from the matrix of the mitochondria to the inner membrane space. Eventually, there is a high concentration of protons build up the membrane space and the protons try to move back into the matrix.

The theory suggests essentially that most adenosine triphosphate (ATP) synthesis in respiring cells comes from the electrochemical gradient across the inner membranes of mitochondria by using the energy of NADH and FADH2 formed from the breaking down of energy-rich molecules such as glucose.

Molecules such as glucose are metabolized to produce acetyl CoA as an energy-rich intermediate. The oxidation of acetyl coenzyme A (acetyl-CoA) in the mitochondrial matrix is coupled to the reduction of a carrier molecule such as nicotinamide adenine dinucleotide (NAD) and flavin adenine dinucleotide (FAD). The carriers pass electrons to the electron transport chain (ETC) in the inner mitochondrial membrane, which in turn pass them to other proteins in the ETC. The energy available in the electrons is used to pump protons from the matrix across the inner mitochondrial membrane, storing energy in the form of a transmembrane electrochemical gradient. The protons move back across the inner membrane through the enzyme ATP synthase. The flow of protons back into the matrix of the mitochondrion via ATP synthase provides enough energy for ADP to combine with inorganic phosphate to form ATP. The electrons and protons at the last pump in the ETC are taken up by oxygen to form water. The coupling of metabolic and light energy to the performance of transmembrane work through the intermediary of electroosmotic gradients. Processes include synthesis of adenosine triphosphate (ATP) by oxidative phosphorylation or by photosynthesis, production of heat, accumulation of small molecules by active transport, movement of bacterial flagella, uptake of deoxyribonucleic acid (DNA) during bacterial conjugation, genetic transformation and bacteriophage infection, and insertion or secretion of proteins into or through membranes. ATP synthase is the enzyme that makes ATP by chemiosmosis. It allows protons to pass through the membrane and uses the free energy difference to phosphorylate adenosine diphosphate (ADP), making ATP. The generation of ATP by chemiosmosis occurs in mitochondria and chloroplasts, as well as in most bacteria and oarchaea, an electron transport chain pumps H+ ions in the thylakoid spaces through thylakoid membranes. The energy from the electron movement through electron transport chains cross through ATP synthase which allows the proton to pass through them and use this free energy difference to photophosphorylate ADP making ATP.

Eventually the weight of evidence began to favor the chemiosmotic hypothesis, and in 1978, Peter Mitchell was awarded the Nobel Prize in Chemistry.

Mitchell’s research has been carried out within an area of biochemistry often referred to in recent years as ‘bioenergetics’, which is the study of those chemical processes responsible for the energy supply of living cells. Life processes, as all events that involve work, require energy, and it is quite natural that such activities as muscle contraction, nerve conduction, active transport, growth, reproduction, as well as the synthesis of all the substances that are necessary for carrying out and regulating these activities, could not take place without an adequate supply of energy. This theory was first received with scepticism; but, over the past 15 years, work in both Mitchell’s and many other laboratories have shown that the basic postulates of his theory are correct. Even though important details of the underlying molecular mechanisms are still unclear, the chemiosmotic theory is now generally accepted as a fundamental principle in bioenergetics. This theory provides a rational basis for future work on the detailed mechanisms of oxidative phosphorylation and photophosphorylation. In addition, this concept of biological power transmission by protonmotive force (or ‘proticity’, as Mitchell has recently began to call it in an analogy with electricity) has already been shown to be applicable to other energy-requiring cellular processes. These include the uptake of nutrients by bacterial cells, cellular and intracellular transport of ions and metabolites, biological heat production, bacterial motion, etc. In addition, the chloroplasts of plants, which harvest the light-energy of the sun, and the mitochondria of animal cells, which are the main converters of energy from respiration, are remarkably like miniaturized solar- and fuel-cell systems. Mitchell’s discoveries are therefore both interesting and potentially valuable, not only for the understanding of biological energy-transfer systems but also in relation to the technology of energy conversion.