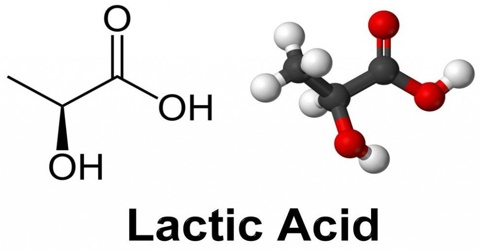 Lactic acid is a syrupy, water-soluble organic acid formed during the fermentation of the milk sours or certain fruits. The chemical formula is C3H6O3. It is transparent in its liquid state. This is both naturally and synthetically generated. It is also produced in the body during glucose’s anaerobic metabolism, as in muscle tissue during exercise, where its accumulation can cause cramping pains. A synthetic form of lactic acid is used as a flavoring and preservative, in dyeing and textile printing, and in pharmaceuticals. Production and Properties of Lactic Acid

Lactic acid was discovered in 1780 by C.W. Scheele in sour milk, and in 1881 Fermi obtained lactic acid by fermentation, resulting in its industrial production. It is produced industrially by bacterial fermentation of carbohydrates (sugar, starch) or by chemical synthesis from acetaldehyde that is available from coal or crude oil. The yearly world lactic acid production is expected to reach 259,000 metric tons by the year 2012. The interest in lactic acid is related to many aspects, among which is its relatively high added-value. Lactic acid producing bacteria could be divided in two classes: homofermentative bacteria like Lactobacillus casei and Lactococcus lactis, producing two moles of lactate from one mole of glucose, heterofermentative species producing one mole of lactate from one mole of glucose as well as carbon dioxide and acetic acid/ethanol. Racemic lactic acid is produced in industry by addition of hydrogen cyanide to acetaldehyde and subsequent hydrolysis of forming lactonitrile.

Very high levels of lactic acid cause a serious, sometimes life-threatening condition called lactic acidosis. Lactic acidosis can also occur in a person who takes metformin (Glucophage) to control diabetes when the heart or kidney failure or a severe infection is also present.

Lactic acid is also employed in pharmaceutical technology to produce water-soluble lactates from otherwise-insoluble active ingredients. It finds further use in topical preparations and cosmetics to adjust acidity and for its disinfectant and keratolytic properties. Lactic acid has many applications. Its existence in the form of two stereoisomers does in fact make the application of one of them or of the racemic mixture of great concern in different fields. In particular, the food and pharmaceutical industries have a preference for the isomer l(+), the only one that can be metabolized by the human body; however, the chemical industry requires one of the pure isomers or a mixture of both, according to the application.