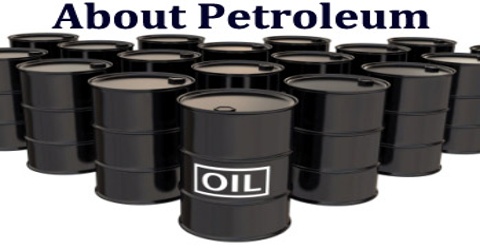 Petroleum is a thick, flammable, yellow-to-black mixture of gaseous, liquid, and solid hydrocarbons that occurs naturally beneath the Earth’s surface. Primary source of automotive fuels and lubricant oils, petroleum is a complex mixture of hydrocarbons and paraffins in some areas, and aromatics and cyclo-paraffins in other areas. A fossil fuel, petroleum is formed when large quantities of dead organisms, usually zooplankton and algae, are buried underneath sedimentary rock and subjected to both intense heat and pressure. Petroleum can be separated into fractions including natural gas, gasoline, naphtha, kerosene, paraffin wax, asphalt, and fuel and lubricating oils, and is used as raw material for a wide variety of derivative products. The word petroleum comes from the Latin Petra, meaning “rock,” andoleum, meaning “oil.” It is believed to originate from the accumulated remains of fossil plants and animals, especially in shallow marine environments.

It is refined and separated, most easily by distillation, into a large number of consumer products, from gasoline (petrol) and kerosene to asphalt and chemical reagents used to make plastics and pharmaceuticals. Petroleum is used in manufacturing a wide variety of materials, and it is estimated that the world consumes about 95 million barrels each day.

Classification of petroleum, derived from the density of the raw petroleum (API gravity) and its various non-hydrocarbon components (especially sulfur), is then added to the geographic designation. The geographic location is important because it affects transportation costs to the refinery. Light crude oil is more desirable than heavy oil since it produces a higher yield of gasoline, while sweet oil commands a higher price than sour oil because it has fewer environmental problems and requires less refining to meet sulfur standards imposed on fuels in consuming countries. Each crude oil has unique molecular characteristics which are revealed by the use of Crude oil assay analysis in petroleum laboratories. The greater the amount of hydrogen in relation to carbon, the lighter the hydrocarbon will be.Less dense oil will float on top of denser oil and is generally easier to pump. The hydrocarbons in crude oil can generally be divided into four categories: Petroleum forms by the breaking down of large molecules of fats, oils and waxes that contributed to the formation of kerogen. The gradual decay by the effect of heat and pressure resulted in the formation of hundreds of compounds. Because it is a fluid and it is able to migrate through the earth as it forms. Petroleum is a fossil fuel derived from ancient fossilized organic materials, such as zooplankton and algae. Vast quantities of these remains settled to sea or lake bottoms, mixing with sediments and being buried under anoxic conditions.

Formation of petroleum occurs from hydrocarbon pyrolysis in a variety of mainly endothermic reactions at high temperature and/or pressure. To form large, economically recoverable amounts of oil underground, two things are needed: an oil pool and an oil trap. An oil pool, which is the underground reservoir of oil, may literally be a pool or it could be droplets of oil collected in a highly porous rock such as sandstone. An oil trap is a non-porous rock formation that holds the oil pool in place.