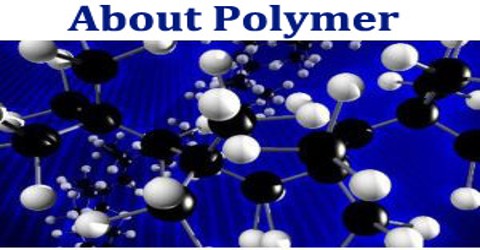 Polymer is a large molecule made up of chains or rings of linked repeating subunits, which are called monomers. It is commonly used today in the plastics and composites industry, and it is often used to imply the meaning of “plastic” or “resin”. The word polymer comes from the Greek prefix poly-, which means “many”, and the suffix -mer, which means “parts”. The word was coined by Jons Jacob Berzelius in 1833, although with a slightly different meaning from the modern definition. The modern understanding of polymers as macromolecules was proposed by Hermann Staudinger in 1920. Many common classes of polymers are composed of hydrocarbons, compounds of carbon and hydrogen. These polymers are specifically made of carbon atoms bonded together, one to the next, into long chains that are called the backbone of the polymer. Because of the nature of carbon, one or more other atoms can be attached to each carbon atom in the backbone. There are polymers that contain only carbon and hydrogen atoms. Polyethylene, polypropylene, polybutylene, polystyrene and polymethylpentene are examples of these. Polyvinyl chloride (PVC) has chlorine attached to the all-carbon backbone. Teflon has fluorine attached to the all-carbon backbone.

Other common manufactured polymers have backbones that include elements other than carbon. Nylons contain nitrogen atoms in the repeat unit backbone. Polyesters and polycarbonates contain oxygen in the backbone. There are also some polymers that, instead of having a carbon backbone, have a silicon or phosphorous backbone. These are considered inorganic polymers. One of the more famous silicon-based polymers is Silly Putty®. Synthesis and Properties of Polymer

Polymer properties are broadly divided into several classes based on the scale at which the property is defined as well as upon its physical basis. The most basic property of a polymer is the identity of its constituent monomers. A second set of properties, known as microstructure, essentially describe the arrangement of these monomers within the polymer at the scale of a single chain. These basic structural properties play a major role in determining bulk physical properties of the polymer, which describe how the polymer behaves as a continuous macroscopic material. Chemical properties, at the nano-scale, describe how the chains interact through various physical forces. At the macro-scale, they describe how the bulk polymer interacts with other chemicals and solvents. Below is a list of common polymers used today, their nickname, and frequent uses: