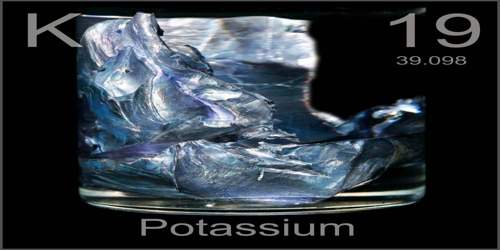 Potassium is a soft, highly reactive, silvery-white metallic element of the alkali group occurring in nature only in compounds. It is essential for the growth of plants and is used especially in fertilizers and soaps. Its atomic number 19; atomic weight 39.098; melting point 63.65°C; boiling point 774°C; specific gravity 0.862; valence 1. It is an alkali metal, a highly reactive substance symbolized by the letter ‘K’ on the periodic table of elements. In appearance, potassium can be described as a silvery-white solid. Potassium in nature occurs only in ionic salts. Elemental potassium is a soft silvery-white alkali metal that oxidizes rapidly in air and reacts vigorously with water, generating sufficient heat to ignite hydrogen emitted in the reaction and burning with a lilac-colored flame. It is found dissolved in sea water, which is 0.04% potassium by weight, and is part of many minerals. It is chemically very similar to sodium, the previous element in group 1 of the periodic table.

Occurrences and Properrties of Potassium

Potassium is so active that it never occurs free in nature. It always occurs in compounds, combined with other elements. It was first prepared in pure form in 1807 by English chemist Sir Humphry Davy (1778-1829). The chemical name for potash is potassium carbonate (K2CO3). Early humans also knew about a similar substance called mineral alkali. This material was made from certain kinds of rocks. But it also had alkali properties. “Mineral alkali” was also called soda ash. The modern chemical name for soda ash is sodium carbonate (Na2CO3). Potassium is an extremely active metal that reacts violently with oxygen in water and air. With oxygen it forms potassium peroxide, and with water potassium forms potassium hydroxide. Floating potassium metal on the surface of water is not a good idea! In that instance, the potassium would skip along the surface of the water. The skipping is caused by hydrogen gas produced in the reaction pushing the metal around. The potassium would soon catch fire, burn, and, perhaps, explode. Potassium reacts readily with all acids and with all non-metals, such as sulfur, chlorine, fluorine, phosphorus, and nitrogen. Sources and Uses of Potassium

Potassium is a mineral that is found in the foods we eat. It is found in a wide range of foods, especially fruits and vegetables such as leafy greens, tomatoes, cucumbers, zucchini, eggplant, pumpkins, potatoes, carrots and beans. It’s also found in dairy foods, meat, poultry, fish and nuts. Potassium is essential to both plant and animal life. It is one of the three primary nutrients, or macronutrients, required by plants. Plants require relatively large amounts of potassium in order to grow and remain healthy. It plays a number of important roles in the human body also. It helps control the proper balance of fluids in cells and body fluids. It is involved in the transmission of chemical messages between nerve cells and in the contraction of muscles. Potassium also helps in the digestion of food and in the proper function of the eyes. In many of these reactions, potassium and sodium work together to keep these functions performing properly.