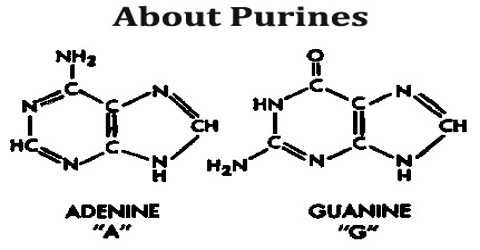 Purines are one of two families of nitrogen-containing molecules called nitrogenous bases. They can be found in every cell of the human body, as well as in a wide assortment of plant-based and animal-based foods. Nitrogenous bases are needed to construct the genetic material in every living organism. Common substances, like caffeine, are purines, and purines are even used to develop many important medications. They are also an essential part of DNA. This places purines, as well as pyrimidines, among the most important of all biological molecules. Essentially, purines are the building blocks of all living things. In the human body, purines can be divided into two categories:

Exogenous purines, the purines that a person eats, are metabolized by the body. Specifically, the liver breaks down the purines and produces a waste product called uric acid. The uric acid is released into the bloodstream and is eventually filtered by the kidneys and excreted in the urine.

If too much uric acid builds up in the bloodstream it is called hyperuricemia. In some people, hyperuricemia can cause kidney stones or lead to an inflammatory joint condition called gout. Other people have absolutely no symptoms of high uric acid levels, and they are referred to as “asymptomatic.” Structure and Functions of Purines

All purines contain a double-ringed structure that consists of a six-membered ring fused to a five-membered ring; think of a honeycomb cell attached to a pentagon. The purine ring is considered a heterocyclic molecule, meaning it is a closed ring containing at least two different kinds of atoms.

Each of a purine’s rings contains two nitrogen atoms, for a total of four within the double-ringed structure. These nitrogen atoms are located in the same positions in all purines. The remaining five positions within the rings are occupied by carbon atoms. The purine ring is encircled by hydrogen atoms, which can be replaced by other atoms or groups of atoms to form different purines.

Aside from the crucial roles of purines (adenine and guanine) in DNA and RNA, purines are also significant components in a number of other important biomolecules, such as ATP, GTP, cyclic AMP, NADH, and coenzyme A. Purine (1) itself, has not been found in nature, but it can be produced by organic synthesis. They may also function directly as neurotransmitters, acting upon purinergic receptors. Adenosine activates adenosine receptors. Purines in Food, Nature and Medicine

Given what scientists now recognize as the widespread importance of purines in our health, it should not be surprising to learn that purines are naturally present in all foods.  The range of purines found in food can also vary widely. While most foods contain 10-15 milligrams of purines in a ½-cup serving, some foods can contain 500-1,000 milligrams or more in this same serving size. For the most part, these much higher purine foods involve the organ meats of animals—including liver, spleen, and heart. None of our 100 WHFoods rise to this very high level of purine content. In general, animal foods and seafood—including our WHFoods meat, poultry, and seafood—contain moderate levels of purines in the 100-400 milligram range (per half cup). Higher levels of meat and seafood consumption are associated with an increased risk of gout, whereas a higher level of consumption of dairy products is associated with a decreased risk. Moderate intake of purine-rich vegetables or protein is not associated with an increased risk of gout.

Purines are abundant in nature. Some scientists believe purines were among the molecules that existed on primitive Earth prior to the origin of life. The isolation of purines from meteorites that were formed when our solar system was born provides evidence that these molecules could be present in other solar systems, too. Purines are found in all living organisms, from the simplest viruses to the most complex multi-cellular creatures. Without purines, our chromosomes – and the genetic material in viruses and bacteria – would not exist. Living cells could not produce energy or synthesize most of the molecules they need to function if it weren’t for purines. Many important plant-based compounds, such as caffeine and theobromine, are purines, too. We enjoy the stimulant properties of these molecules, but they serve a more practical purpose in their parent plants, where they discourage foraging insects and animals.

Anticancer agents, such as azathioprine and mercaptopurine; asthma medications, like aminophylline; and antiviral drugs, including Zovirax, ribavirin, and ganciclovir, are among the purine-based drugs on the market today.