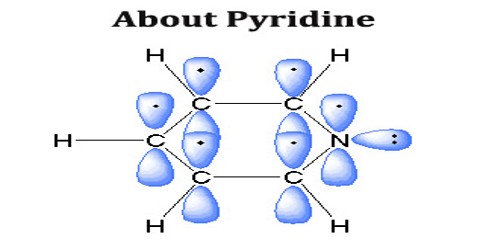 Pyridine is a colorless hygroscopic liquid with a characteristic odor. It is a basic chemical compound containing one nitrogen atom and five carbon atoms in its molecules and is employed as a solvent and in preparing other organic chemicals.Formula: C5 H5 N

Pyridine was discovered in 1849 by the Scottish chemist Thomas Anderson as one of the constituents of bone oil. Two years later, Anderson isolated pure pyridine through fractional distillation of the oil. It is a colorless, highly flammable, weakly alkaline, water-soluble liquid with a distinctive, unpleasant fish-like smell. Pyridine is used as a solvent and is added to ethyl alcohol to make it unfit for drinking. It is converted to such products as sulfapyridine, a drug active against bacterial and viral infections; pyribenzamine and pyrilamine, used as antihistaminic drugs; piperidine, used in rubber processing, and as a chemical raw material; and water repellents, bactericides, and herbicides. Compounds not made from pyridine but containing its ring structure include niacin and pyridoxal, both B vitamins; isoniazid, an antitubercular drug; and nicotine and several other nitrogenous plant products.

Pyridine occurs in coal tar, its principal source before the development of synthesis based on acetaldehyde and ammonia. The pure substance is a colorless, flammable, weakly alkaline, water-soluble liquid with an unpleasant odor; it boils at 115.5° C (234° F).

Pyridine is a common aprotic but strongly polar solvent. It is widely used in the fine chemical and pharmaceutical industries. Pyridine is the solvent of choice for acylation and dehydrochlorination reactions. It is applied as a solvent in paint and rubber preparation, pharmaceuticals, and in research laboratories for purposes such as extracting plant hormones. Pyridine is used as a solvent in the manufacture of polycarbonate resins used in hand tools, camera parts, safety helmets, and electrical connectors. It is a solvent for anhydrous mineral salts. It is used directly in the denaturation of ethyl alcohol, antifreeze mixtures, or fungicides. Because it has a disagreeable odor and a burning taste, it is added to chemicals to make them unsuitable for human consumption. (Use of pyridine in the chemical industry, VEB Berlin-Chemie, 1959.)

Pyridine is used in food flavorings. In many cases there are complex compounds that contain pyridine. It can be found in seafood flavors and chocolate. Large amounts of pyridine are used as an intermediate in the manufacture of pesticides like herbicides (diquat, paraquat), insecticides (chlorpyrifo), and fungicides (pyrithione). It is miscible with water and virtually all organic solvents. It is weakly basic, and with hydrochloric acid, it forms a crystalline hydrochloride salt that melts at 145–147 °C. Most chemical properties of pyridine are typical of a heteroaromatic compound. In organic reactions, pyridine behaves both as a tertiary amine, undergoing protonation, alkylation, acylation, and N-oxidation at the nitrogen atom, and as an aromatic compound, undergoing nucleophilic substitutions. Pyridine itself is a relatively weak ligand in forming complexes with transition metal ions.

Pyridine has a conjugated system of six π electrons that are delocalized over the ring. The molecule is planar and, thus, follows the Hückel criteria for aromatic systems. In contrast to benzene, the electron density is not evenly distributed over the ring, reflecting the negative inductive effect of the nitrogen atom. Many analogues of pyridine are known where N is replaced by other heteroatoms. Substitution of one C–H in pyridine with a second N gives rise to the diazine heterocycles (C4H4N2), with the names pyridazine, pyrimidine, and pyrazine.

Very few studies have been conducted to determine the possible effects of pyridine exposure on human health. From case reports on humans and studies in animals, we think the most important health concern for humans exposed to pyridine will be damage to the liver. Other health concerns for humans may be neurological effects, renal effects, and irritation of the skin and eye. We do not know whether pyridine can cause cancer, birth defects, or problems with reproduction.