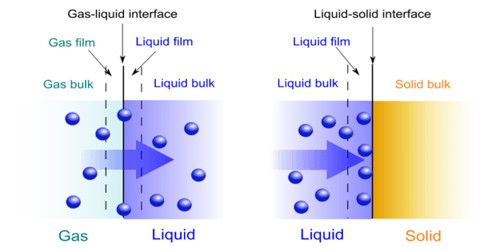 The physical or chemical process by which a substance in one state becomes incorporated into and retained by another substance of a different state. It is the process by which one thing absorbs or is absorbed by another. In chemistry, absorption pertains to the process in which a substance permeates another, as in a liquid permeating, or absorbed by, a solid. As an industrial process, the most commonly encountered use of absorption is for the separation and/or purification of a gas mixture by the absorption of part of the mixture in a solvent. Absorption differs from adsorption in that the first substance permeates the entire bulk of the second substance, rather than just adhering to the surface. Adsorption is based on the surface where a film of adsorbate is developed on the surface, and absorption includes the complete volume of the absorbing agent. The process of gas or liquid which penetrates into the body of adsorbent is commonly known as absorption. In biology, absorption pertains particularly to the process of absorbing or assimilating substances into the cell or across the tissues and organs. It is done through diffusion or osmosis. Physical absorption of gas or part of a gas mixture in a liquid solvent involves the mass transfer that occurs at the interface between the gas and the liquid and the rate at which the gas diffuses into the liquid.

The process of absorption means that a substance captures and transforms energy. The process by which matter (typically electrons bound in atoms) takes up the energy of electromagnetic radiation and transforms it into any of various types of internal energy, such as thermal energy. The absorbent distributes the material it captures throughout the whole and adsorbent only distributes it through the surface. This type of absorption is the principle on which spectrophotometry is based.