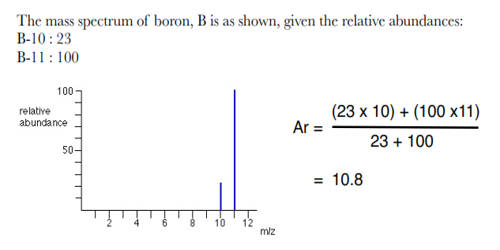 Abundance – in a chemical reaction

Abundance – in a chemical reaction

In a chemical reaction, a reactant is considered to be in abundance if the quantity of that substance is high and virtually unchanged by the reaction. It is a measure of the occurrence of the chemical elements relative to all other elements in a given environment. Abundance differs from excess in that a reactant in excess is simply any reactant other than the limiting reagent; the amount by which a reactant is in excess is often specified, such as with terms like “twofold excess”, indicating that there is twice the amount of reactant necessary for the limiting reagent to be completely reacted. In this case, should the reaction go to completion, the quantity of the reactant in excess will have halved. The abundance of chemical elements in the universe is dominated by the large amounts of hydrogen and helium which were produced in the Big Bang.

When performing kinetic or thermodynamic studies, it is often useful to have one or more reactants in abundance, as it allows their concentrations to be treated as constants (or parameters) rather than as variables. The abundance of elements in the Sun and outer planets is similar to that in the universe. The relative abundance of an isotope is the percentage of atoms with a specific atomic mass found in a naturally occurring sample of an element. The relative abundance definition in chemistry is the percentage of a particular isotope that occurs in nature.

Example problem: If the masses of one isotope of nitrogen, nitrogen-14, is 14.003 amu and another isotope, nitrogen-15, is 15.000 amu, find the relative abundance of the isotopes.

The problem is asking to solve for x, the relative abundance. Assign one isotope as (M1) and the other as (M2).