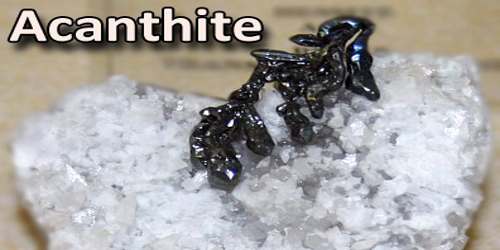 Acanthite is one of the most important ores of silver with the chemical formula Ag2S. It is a stable and low-temperature form of Silver Sulfide. It is abundant, with other silver minerals, in the sulfide mineral deposits of Kongsberg, Nor.; Kremnica, Slovakia; Zacatecas, Mex.; and the Comstock Lode, Nev., U.S. Acanthite is named for the Greek term akantha, which means “thorn”, in allusion to it pointy crystal forms. Argentite is named for argentum, which is the Latin word used for silver.

Argentite is the high-temperature form of acanthite. Like several other sulfides, selenides, and tellurides of silver and copper, argentite forms isometric crystals at high temperatures. Upon cooling these crystals invert from isometric (cubic) to monoclinic structures while remaining unchanged in external appearance.

However, they are scientifically recognized as two unique minerals, even though they are composed of the same substance. They only differ in crystal structure. As explained below in more detail, Argentite cannot exist at normal temperatures. Specimens labeled as Argentite are sometimes sold by dealers; however, these specimens are really Acanthite pseudomorphs after Argentite.

Occurrences and Properties of Acanthite

Acanthites are usually found in silver veins as small masses, often earthy or as a coating. Associated with native silver, the ruby silvers, stephanite and other silver minerals as well as other sulfides such as galena. It was first described in 1855 for an occurrence in the Jáchymov (St Joachimsthal) District, Krušné Hory Mts (Erzgebirge), Karlovy Vary Region, Bohemia, Czech Republic. The name is from the Greek “akantha” meaning thorn or arrow, in reference to its crystal shape. The mineral is found in the secondary enrichment zones of veins associated with silver and other sulfides in many silver-mining districts. In Nevada it is an important ore at the Comstock Lode, Tonopah and in the Cortez district. It is found also near Port Arthur on the north shore of Lake Superior, in Ontario, and associated with native silver in the copper mines of Michigan. The rich silver ores of Mexico, Chile, Bolivia and Peru are composed largely of this mineral. Important European localities for its occurrence are Freiberg in Saxony, Annaberg in Austria, Joachimsthal in Bohemia, Schemnitz and Kremnitz in Hungary and Kongsberg in Norway. Much of the silver produced in the US country was obtained from acanthite, though by no means so great a quantity as is obtained from other sources. Still, it is an important ore of silver.

Acanthite crystallizes in the monoclinic system, and Argentite crystallizes in the isometric system. However, the crystal structure of Argentite is unstable at temperatures below 356° F (180° C), and below that temperature its crystal structure will change to Acanthite, though retaining the isometric crystals of Argentite. Therefore, Argentite specimens are really Acanthite pseudomorphs after Argentite. Crystals are usually in parallel groups. The most prevalent aggregates are groupings of distorted octahedrons and dendritic growths, but it also occurs as a coating and massive. Individual cubes, octahedrons, and modified dodecahedrons do exist, but are uncommon. Acanthite is the most important ore of silver. It is most commonly found as massive, platy, earthy forms or as a coating on other rocks. Well formed crystals are fairly rare. The crystals are often distorted and grouped into parallel growths of different shapes. It is a popular mineral in high-end collections, with well-crystallized specimens being highly sought after by collectors and commanding high prices.