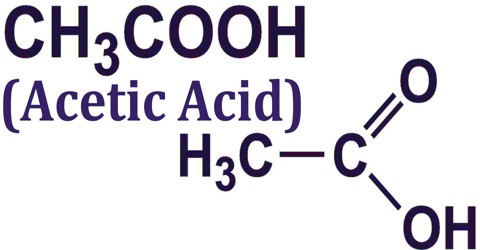 Acetic Acid (CH3COOH) is a clear, colorless organic acid having a distinctive pungent odor. It is used as a solvent and in the manufacture of rubber, plastics, acetate fibers, pharmaceuticals, and photographic chemicals. Acetic acid is the chief acid of vinegar. It is a synthetic carboxylic acid with antibacterial and antifungal properties. Although its mechanism of action is not fully known, undissociated acetic acid may enhance lipid solubility allowing increased fatty acid accumulation on the cell membrane or in other cell wall structures. Acetic acid, as a weak acid, can inhibit carbohydrate metabolism resulting in subsequent death of the organism. Acetic Acid is the second simplest carboxylic acid and consists of two small functional groups, an acetyl group and a hydroxyl group (AcOH); it can also be viewed as a methyl group and a carboxyl group linked. It is an important chemical reagent and industrial chemical, used primarily in the production of cellulose acetate for photographic film, polyvinyl acetate for wood glue, and synthetic fibres and fabrics. Its chemical formula is C2H4O2: it has two carbon (C) atoms, four hydrogen (H) atoms and two oxygen (O) atoms. Because it has a carbon in its chemical formula, it is an organic compound. Its chemical formula can be written multiple ways, as shown here: C2H4O2, CH3COOH and CH3CO2H.

Industrially, acetic acid is used in the preparation of metal acetates, used in some printing processes; vinyl acetate, employed in the production of plastics; cellulose acetate, used in making photographic films and textiles; and volatile organic esters, such as ethyl and butyl acetates, widely used as solvents for resins, paints, and lacquers. Biologically, acetic acid is an important metabolic intermediate, and it occurs naturally in body fluids and in plant juices. As a chemical reagent, biological sources of acetic acid are of interest, but generally cannot compete economically. Vinegar is mostly dilute acetic acid, often produced by fermentation and subsequent oxidation of ethanol. Vinegar is 4 – 8% solution of acetic acid in water and mainly used as household essential for cooking and to unclog sinks. IUPAC name of acetic acid is ethanoic acid or methane carboxylic acid. The molecular formula is CH3COOH. It is a colorless liquid with a strong and distinct pungent and sour smell.

The acetic acid molecule converts into acetate ion with chemical formula CH3COO-. The acetate ion is stabilized due to delocalization of negative charge over two electronegative oxygen atoms. So acetic acid is acidic in nature due to; It is weak carboxylic acid which cannot ionize completely in its solution so un-ionized molecules remain in equilibrium with acetate ions and hydrogen ions. Due to weak nature, acetic acid has many applications even in chemical industry and organic chemistry. It forms one of the most common buffer solutions with sodium acetate which exhibits resistance against change in pH for different reaction systems.

Acetic acid is a monocarboxylic acid as it has one –COOH group. It is one of the most common organic reagents with various applications. It has different industrial applications and also involves in the preparation of different chemical compounds.

We most commonly know that acetic acid is used in vinegar, it is used for so much more, and it is a very important chemical used in many industrial processes. It is also used in a popular science project – the volcano science experiment – where the lava is vinegar reacting with baking soda colored in red food coloring. Vinegar is most definitely a cook’s friend. It is so important in the kitchen that we may even have many different types of vinegar: balsamic vinegar, apple cider vinegar, red and white wine vinegar, and more. A majority of the acetic acid that is produced is used to produce vinyl acetate monomer, or VAM. What is so important about VAM? Vinyl acetate monomer (VAM) is a building block that is used in many industries to make paints, adhesives, packaging, and more.

Acetic acid is main ingredient in many medicines and also used for the treatment of different infections such as outer ear infection. Use of acetic acid prevents the growth of bacteria and fungus. It is also a component of the vaginal lubrication of humans and other primates, where it appears to serve as a mild antibacterial agent.