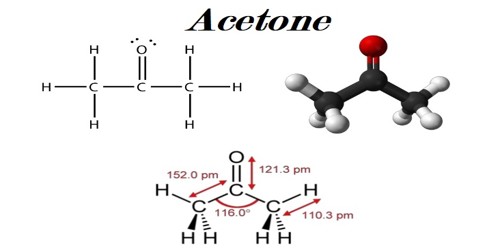 Acetone, or propanone, is an organic compound with the chemical formula (CH3)2CO. It consists of three carbon atoms, six hydrogen atoms, and one oxygen atom. It is a general building block in organic chemistry.  It is a colorless, volatile, flammable organic solvent. This clear, mobile, easy-to-burn liquid is the simplest example of the ketones. It is one of the ketone bodies produced during ketoacidosis. Acetone can be mixed with water. It is an important solvent, often to clean things in the laboratory. It is an excellent solvent because it can dissolve other substances. It occurs naturally in plants, trees, forest fires, vehicle exhaust and as a breakdown product of animal fat metabolism. It occurs naturally in the human body as a byproduct of metabolism. In the human body, it is present in urine and blood at low levels.

Common uses of acetone in the home are as the active ingredient in nail polish remover and as paint thinner. At home, it can be found in nail polish remover, paint strippers, glue removers, and in tobacco smoke. It is a common building block in organic chemistry. It is not regarded as a waste product of metabolism.

Acetone is used to make plastic, fibers, drugs, and other chemicals. It is used in the production of pharmaceuticals and cosmetics. It is regularly used for cleaning in households, commercial operations, and laboratories. It is widely used in the textile industry for degreasing wool and degumming silk. It is also used to dissolve other substances. Moreover, it is an industrial solvent. Companies also use this chemical to remove grease from wool, reduce the stickiness of silk, and make protective coatings for furniture and cars. It is widely used because it can easily mix with water and evaporates quickly in the air. It uses as glassware cleaning, pharmaceutic (solvent,) and analyses, including liquid chromatography.