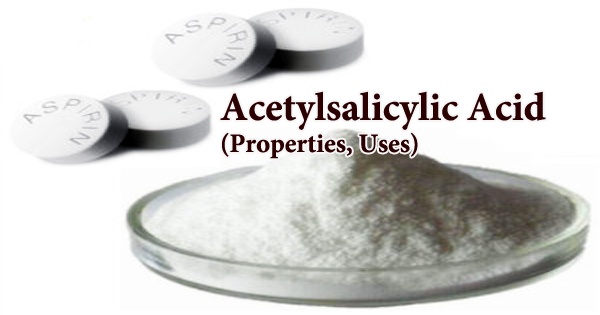 Acetylsalicylic acid (ASA), often known as aspirin, binds to and acetylates serine residues in cyclooxygenases, causing prostaglandin synthesis to be reduced, platelet aggregation to be reduced, and inflammation to be reduced. Analgesic, antipyretic, and anticoagulant effects are all present in this substance. It’s a pain reliever, fever reducer, and inflammation reducer. Kawasaki illness, pericarditis, and rheumatic fever are some of the inflammatory disorders that aspirin is used to treat.

ASA is a crystalline white powder that is odorless and stable in dry air. In wet air, it will slowly hydrolyze into salicylic acid and acetic acid, and an aqueous solution will have an acidic response. Water is slightly soluble; ethanol, ethyl ether, chloroform, sodium hydroxide solution, and sodium carbonate solution are all soluble. Aspirin is a non-steroidal anti-inflammatory drug that can be taken orally and reduces the chance of death after a heart attack. In those who are at high risk for heart attacks, ischemic strokes, and blood clots, it is also taken long-term to help prevent further heart attacks, ischaemic strokes, and blood clots. Aspirin as a chemoprotective drug has been found to reduce overall cancer incidence and death in colorectal, esophageal, and gastric cancers, with minor effects on prostate, breast, and lung cancers.

With nearly a century of clinical usage, aspirin, also known as acetylsalicylic acid, is possibly the most widely used analgesic and antipyretic medicine in the world. It possesses antipyretic, analgesic, anti-inflammatory, and anti-rheumatism properties, which is why it’s commonly used to treat fever, headache, muscle pain, neuralgia, rheumatic fever, acute rheumatic arthritis, gout, and other rheumatic conditions. Acetylsalicylic acid also has an antiplatelet aggregation action and can be used to prevent arterial thrombosis, atherosclerosis, transient cerebral ischemia, and myocardial infarction. It can also be used to treat biliary tract roundworm disease and athlete’s foot.

In solutions of ammonium acetate or the acetates, carbonates, citrates, or hydroxides of the alkali metals, ASA decomposes fast. This product is a white crystalline substance with a melting point of 138°C. It is insoluble in water but soluble in alcohol, ether, and other organic solvents. Aspirin can cause multiple types of liver injury: at large dosages, it can produce mild to marked serum aminotransferase increases with jaundice or symptoms of liver dysfunction, and at lower doses, it can cause Reye syndrome in susceptible infants with a febrile illness. The hydrolysis of acetate and salicylate occurs rapidly in alkali solutions, and the clear solutions generated may contain only acetate and salicylate.

Acetylsalicylic acid has antithrombotic properties in the body and can minimize the formation of obstructive blood clots in surrounding arteries, as well as block platelet response and endogenous ADP, 5-HT, and other factors, inhibiting the second phase of platelet aggregation. It has both anti-inflammatory and antipyretic effects. This medicine also prevents blood clots, strokes, and myocardial infarction by inhibiting platelet aggregation (MI). Because the powder-air mixture can be explosive, aspirin tablet producers, like flour mills, must limit the amount of powder that becomes airborne inside the structure.

The mechanism of action of acetylsalicylic acid is to cause cyclooxygenase acetylation in platelets, which inhibits the synthesis of ring peroxide and TXA2 formation. In the meantime, acetylate platelet membrane protein and inhibit platelet membrane enzyme, which aids in platelet function inhibition. Aspirin is manufactured through an esterification process. When salicylic acid is treated with acetic anhydride, an acid derivative, the hydroxyl group of the acid is converted to an ester group (R-OH R-OCOCH3). When the cyclooxygenase enzyme is blocked, the blood vessel wall generated PGI2 and the platelet TXA2 synthetic enzymes are likewise inhibited, affecting the synthesis of both TXA2 and PGI2.

Interestingly, long-term usage of acetylsalicylic acid has been shown in trials to reduce the incidence of numerous malignancies, including colorectal, esophageal, breast, lung, prostate, liver, and skin cancer. Because aspirin can degrade through hydrolysis in damp conditions, releasing salicylic and acetic acids, formulations with high amounts of aspirin sometimes smell like vinegar. Only patients with ischemic stroke with a recent history of myocardial infarction or coronary stent insertion should take aspirin and clopidogrel together, and only with ultra-low-dose aspirin to reduce bleeding risk.

Aspirin is a non-selective cyclooxygenase (COX) inhibitor that comes in a variety of doses and forms, including chewable pills, suppositories, and extended-release formulations. ASA is a white, crystalline, mildly acidic material having a melting point of 136 °C (277 °F) and a boiling temperature of 140 °C (284 °F). At 25 °C (77 °F), its acid dissociation constant (pKa) is 3.5. Aspirin is now one of the world’s most extensively used drugs, with an estimated 40,000 tonnes taken each year. Acetylsalicylic acid (ASA) is the generic name in countries where Aspirin is a registered trademark owned by Bayer.

Accidental poisoning in young children is particularly common due to acetylsalicylic acid. Young children, toddlers, and newborns should not have access to it. It is a weak acid, and following oral administration, only a little amount of it is ionized in the stomach. In the acidic environment of the stomach, acetylsalicylic acid is readily absorbed through the cell membrane. It’s utilized to emphasize exterior structural members and equipment parts like the car body, agricultural machinery parts, meters and electric lamps, road markers, and so on.

Acetylsalicylic acid generates unpleasant smoke and odors when heated to break down. It is the oldest, most popular, and most widely used antipyretic analgesics anti-rheumatism drug. It possesses antipyretic-analgesic, anti-inflammatory, and anti-platelet aggregation pharmacological actions, and it works rapidly and efficiently. The occurrence of aspirin resistance complicates the use of aspirin for prophylaxis. Aspirin’s efficacy is lowered in persons who are resistant to it. Some writers have proposed testing methods to identify aspirin-resistant patients. More recently, there is some evidence that aspirin lessens the chance of heart attacks as a result of its effectiveness as a blood “thinner.”