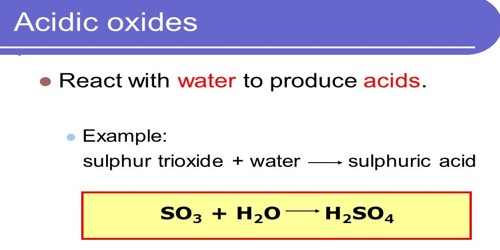 An acidic oxide reacts with water and produces acid. They are also called acid anhydride, which are oxides that react with water to form an acid, or with a base to form a salt. They are oxides of either nonmetal or of metals in high oxidation states. An oxide is a binary compound that we obtain upon the reaction of oxygen with other elements. Their chemistry can be systematically understood by taking an oxoacid and removing water from it until only an oxide remains. The resulting oxide belongs to this group of substances. Usually, it is the oxide of non-metals. For example, sulfurous acid (SO2), sulfuric acid (SO3), and carbonic acid (CO2) are acidic oxides. Thus, CO2 dissolves in water to give carbonic acid, and NO2 gives a mixture of nitrous and nitric acids. An inorganic anhydride (a somewhat archaic term) is an acid anhydride without an organic moiety.

Acidic oxides are mostly oxides of non-metals, and they dissolve in water to form acids. They are not Brønsted–Lowry acids because they do not donate protons; however, they are Arrhenius acids because they increase the hydrogen ion concentration of water. are covalent compounds whereas basic oxides are ionic compounds. For instance, carbon dioxide increases the hydrogen ion concentration of rainwater (pH = 5.6) by a factor of 25 compared to pure water (pH = 7). They react with bases forming salts and water. They are also Lewis acids because they accept electron pairs from some Lewis bases, most notably base anhydrides. Similarly, basic oxides readily react with and dissolve in acids forming salts and water. 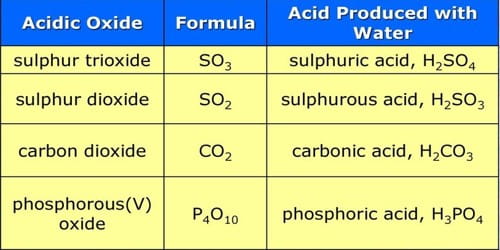 The oxides of period three elements demonstrate periodicity with respect to acidity. Acidic oxides create H3O+ ions, whenever mixed along with water. As one moves across the period, the oxides become more acidic. Sodium and magnesium oxides are alkaline. Aluminum oxides are amphoteric (reacting both as a base or acid). Silicon, phosphorus, sulfur, and chlorine oxides are acidic. Some non-metal oxides, such as a nitrous oxide (N2O) and carbon monoxide (CO), do not display any acid/base characteristics. They are the oxides of the non-metallic elements that form acidic solutions when reacted with water.

Acidic oxides can also react with basic oxides to produce salts of oxoanions:

Acidic oxides are environmentally relevant. Sulfur and nitrogen oxides are considered air pollutants as they react with atmospheric water vapor to produce acid rain. They are one that tends to form an acidic solution in water or will act as an acid in certain chemical reactions.