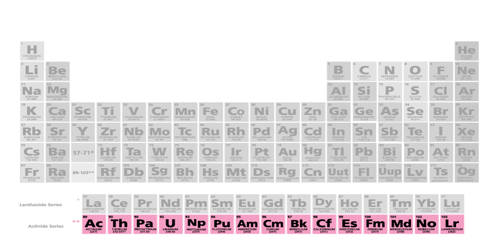 The actinide is a periodic series of metallic elements with atomic numbers 89 to 103, from actinium through lawrencium. This series encompasses the 15 metallic chemical elements with atomic numbers from 89 to 103, actinium through lawrencium. At the bottom of the periodic table is a special group of metallic radioactive elements called actinides or actinoids. They are named after the first element in the series, actinium. The first actinides discovered were uranium and thorium.

The actinide series derives its name from the first element in the series, actinium. These elements, usually considered ranging from atomic number 89 to atomic number 103 on the periodic table, have interesting properties and play a key role in nuclear chemistry. They are highly electropositive. There are 15 actinide elements. The informal chemical symbol An is used in general discussions of actinide chemistry to refer to any actinide. They are very dense metals with distinctive structures. All but one of the actinides are f-block elements, with the exception being either actinium or lawrencium. The series mostly corresponds to the filling of the 5f electron shell, although actinium and thorium lack any 5f electrons, and curium and lawrencium have the same number as the preceding element. In comparison with the lanthanides, also mostly f-block elements, the actinides show much more variable valence. The actinides are most known for the elements uranium and plutonium which are used in nuclear reactors and nuclear bombs. Uranium and thorium also have diverse current or historical uses, and americium is used in the ionization chambers of most modern smoke detectors.

They all are radioactive. These elements have no stable isotopes. They all have very large at