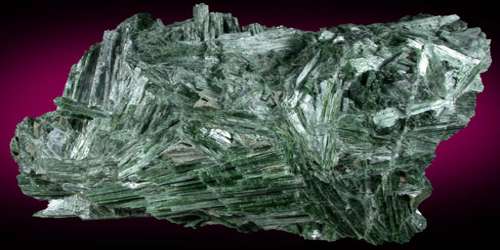 Simple actinolite occasionally forms interesting crystal habits and specimens. Crystals can be similar to hornblende, but are always translucent or even transparent. Typically they are prismatic, flattened and elongated. Crystal specimens of actinolite can make very interesting mineral specimens. Actinolite is commonly found in metamorphic rocks, such as contact aureoles surrounding cooled intrusive igneous rocks. It also occurs as a product of metamorphism of magnesium-rich limestones. A series occurs when ions can freely substitute between each other. In this case, when iron is predominant the mineral is ferro-actinolite and when magnesium is predominant the mineral is tremolite. Actinolite is the intermediate member.

The old mineral name uralite is at times applied to an alteration product of primary pyroxene by a mixture composed largely of actinolite. The metamorphosed gabbro or diabase rock bodies, referred to as epidiorite, contain a considerable amount of this uralitic alteration.

Fibrous actinolite is one of the six recognised types of asbestos, the fibres being so small that they can enter the lungs and damage the alveoli. Actinolite asbestos was once mined along Jones Creek at Gundagai, Australia.

Some forms of actinolite are used as gemstones. One is nephrite, one of the two types of jade (the other being jadeite, a variety of pyroxene).

Another gem variety is the chatoyant form known as cat’s-eye actinolite. This stone is translucent to opaque, and green to yellowish green color. This variety has had the misnomer jade cat’s-eye. Transparent actinolite is rare and is faceted for gem collectors. Major sources for these forms of actinolite are Taiwan and Canada. Other sources are Madagascar, Tanzania, and the United States.