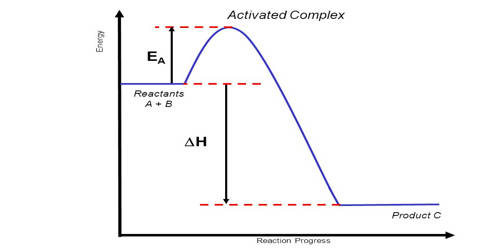 An activated complex is the structure that results in the maximum energy point along the reaction path. It is an intermediate structure formed in the conversion of reactants to products. In chemistry, it is defined by the International Union of Pure and Applied Chemistry (IUPAC) as “that assembly of atoms which corresponds to an arbitrary infinitesimally small region at or near the col (saddle point) of a potential energy surface”. It is an intermediate state that is formed during the conversion of reactants into products. In other words, it refers to a collection of intermediate structures in a chemical reaction that persists while bonds are breaking and new bonds are forming. The energy of the activated complex is higher than that of either the reactants or products, which makes the activated complex unstable and temporary. It therefore represents not one defined state, but rather a range of transient configurations that a collection of atoms passes through in between clearly defined products and reactants. If enough energy is available, the products form. It is the complex that exists as the bonds in the products are forming and the bonds in the reactants are breaking. 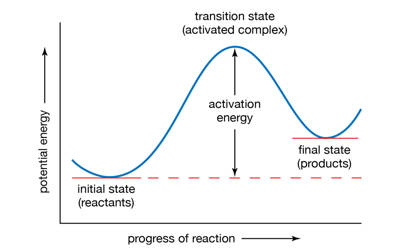 An Activated Complex is a high energy state that a reaction goes through in order to change reactants to products. It is the subject of transition state theory – also known as an activated complex theory – which studies the kinetics of reactions that pass through a defined intermediate state with standard Gibbs energy of formation ΔG°‡. It is an unstable arrangement of atoms that exists momentarily at the peak of the activation energy barrier. The state represented by the double dagger symbol is known as the transition state and represents the exact configuration that has an equal probability of forming either the reactants or products of the given reaction. This complex exists for a very short period of time and is found when the energy of the system is at its maximum.