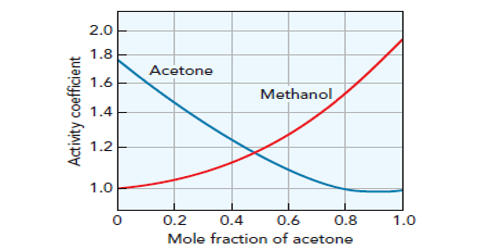 The activity coefficient of an electrolyte solution is used to factor in the concentration-dependent interactions between ions in a solution. This term gives an idea of how much interaction exists between molecules at higher concentrations. In an ideal mixture, the microscopic interactions between each pair of chemical species are the same (or macroscopically equivalent, the enthalpy change of solution and volume variation in mixing is zero) and, as a result, properties of the mixtures can be expressed directly in terms of simple concentrations or partial pressures of the substances present e.g. Raoult’s law. Although activity coefficients may be used for both liquid and gas, conventional use restricts activity coefficients to liquid phases and the alternative measure of deviations from ideality ѕ Fugacity ѕ for the gaseous phase. Deviations from ideality are accommodated by modifying the concentration by an activity coefficient. Analogously, expressions involving gases can be adjusted for non-ideality by scaling partial pressures by a fugacity coefficient. By changing the composition of the aqueous solution, the activity coefficient of the neutral solute is determined under the conditions of interest.

The concept of activity coefficient is closely linked to that of activity in chemistry. It describes how solute-solvent interactions contribute to nonideal behavior and are favored by chemical engineers for modeling separation processes (e.g., extraction and distillation). Activity coefficients in liquid phases are usually measured by establishing a gaseous phase in thermodynamic and phase equilibrium with the liquid phase and then making use of the fact that under these conditions, the chemical potential of each individual component is the same in both the liquid and gaseous phases. It is a mixture of property that provides a measure of the non-ideality of the solution phase. In solutions, the activity coefficient is a measure of how much a solution differs from an ideal solution—i.e., one in which the effectiveness of each molecule is equal to its theoretical effectiveness.