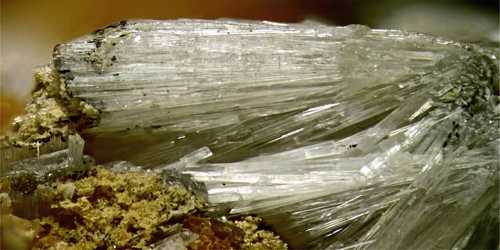 Adamsite-(Y); chemical formula NaY(CO3)2·6H2O is a mineral of sodium, yttrium, carbon, oxygen, and hydrogen. It is named after Frank Dawson Adams (1859–1942), professor of geology, McGill University. Its Mohs scale rating is 3.

Adamsite-(y) occurs in a rare late-stage, low-temperature hydrothermal mineral in an alkalic pegmatite dike, associated with an intrusive alkalic gabbro-syenite complex. It is often associated with minerals such as thomasclarkite-(Y), donnayite-(Y), petersenite-(Ce), horvathite-(Y), and rhodochrosite. Adamsite-(y) can be identified in the field by its color variations, such as white, pale pink, and pale purple. It is sometimes even colorless. It is translucent to transparent, with brittle fracture and spherical, rounded aggregates. It has {001} perfect, {100} good, {010} good cleavage. This mineral has a vitreous, pearly luster, with a white streak.

The hardness of adamsite-(y) is 3 – approximate to calcite.