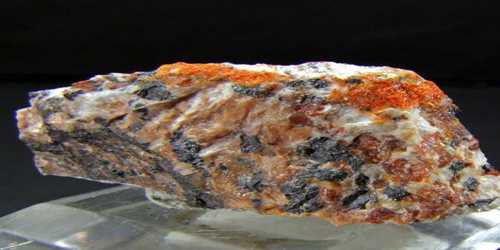 Adelite is a rare arsenic-containing mineral which occurs as colorless to grey or green elongated crystals, often in polycrystalline masses. The rare mineral adelite is a calcium, magnesium, arsenate with chemical formula CaMgAsO4OH. It forms a solid solution series with the vanadium-bearing mineral gottlobite. Various transition metals substitute for magnesium and lead replaces calcium leading to a variety of similar minerals in the adelite – duftite group.

Adelite forms variably colored (blue, green, yellow, and grey) crystals in the orthorhombic crystal system. The form is typically massive. It has a Mohs hardness rating of 5 and a specific gravity of 3.73 to 3.79.

It was first described in 1891 from Värmland, Sweden. Its name comes from the Greek word for indistinct. A basic arseniate of calcium and magnesium, of a grayish color, occurring in embedded grains and rarely in monoclinic crystals: found in Sweden.