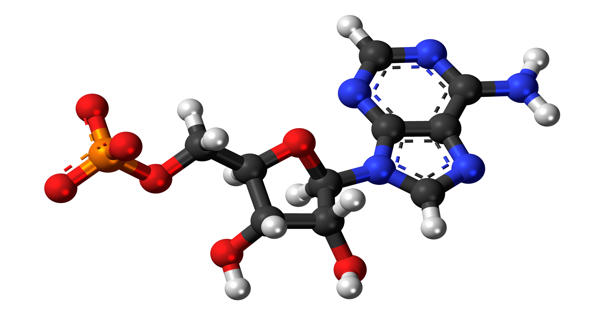 AMP plays an important role in many cellular metabolic processes, being interconverted to ADP and/or ATP. It is an important participant in energy processes in the living cell. It is one of the components of RNA and also the organic component of the energy-carrying molecule ATP. AMP is also a component in the synthesis of RNA. AMP is present in all known forms of life.

Our bodies produce AMP in the process of creating adenosine triphosphate (ATP). You might remember ATP from chemistry classes, as it’s a major source of energy used throughout the body.

AMP does not have the high energy phosphoanhydride bond associated with ADP and ATP. AMP can be produced from ADP:

Or AMP may be produced by the hydrolysis of one high energy phosphate bond of ADP:

AMP can also be formed by hydrolysis of ATP into AMP and pyrophosphate:

AMP can be regenerated to ATP as follows:

AMP can be converted into IMP by the enzyme myoadenylate deaminase, freeing an ammonia group.

In a catabolic pathway, adenosine monophosphate can be converted to uric acid, which is excreted from the body in mammals.