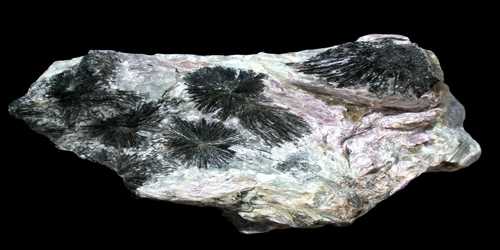 Aegirine is a member of the clinopyroxene group of inosilicates. Aegirine is the sodium endmember of the aegirine-augite series. Aegirine has the chemical formula NaFe3+[ Si2O6] in which the iron is present as Fe3+. In the aegirine-augite series, the sodium is variably replaced by calcium with iron (II) and magnesium replacing the iron(III) to balance the charge. Aluminium also substitutes for the iron (III). It is also known as acmite, which is a fibrous, green-colored variety.

It was first described in 1835 for an occurrence in Rundemyr, Buskerud, Norway. Aegirine was named after the Teutonic god of the sea. A synonym for the mineral is acmite in reference to the typically pointed crystals. Aegirine occurs as dark green monoclinic prismatic crystals. It has a glassy luster and perfect cleavage. The Mohs hardness varies from 5 to 6 and the specific gravity is 3.2 to 3.4.

Commonly occurs in alkalic igneous rocks, nepheline syenites, carbonatites, and pegmatites. Also in regionally metamorphosed schists, gneisses, and iron formations; in blueschist facies rocks, and from sodium metasomatism in granulites. It may occur as an authigenic mineral in shales and marls. It occurs in association with potassic feldspar, nepheline, riebeckite, arfvedsonite, aenigmatite, astrophyllite, catapleiite, eudialyte, serandite, and apophyllite.