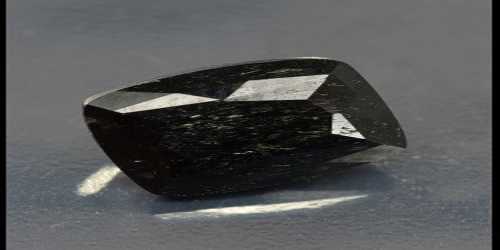 Aenigmatite is an uncommon mineral that is often a primary constituent of sodium-bearing alkalic volcanic rocks, pegmatites, and other igneous rocks that are silica-poor. The chemical formula is [Na2Fe2+5TiSi6O20] and its structure consists of single tetrahedral chains with a repeat unit of four and complex side branches. It was named after the Greek word for the riddle, as an allusion to its (formerly) uncertain chemical composition.

Localities for Aenigmatite include in Greenland, Russia, Norway, Italy, the United States, Australia, and New Zealand, among many others. It is primarily found in peralkaline volcanic rocks, pegmatites, and granites as well as silica-poor intrusive rocks

It can be identified in the field by its color variations, such as brown, and black. Its opaque form has perfect cleavage. This mineral has a sub-adamantine luster, with the reddish-brown streak. The density is 3.74 to 3.85 g/cm3, with a hardness of 5 to 6 – between apatite and orthoclase. Aenigmatite occurs as a primary constituent in sodium-rich alkalic volcanics, pegmatites, and other silica-poor igneous rocks. It is often associated with minerals such as aegirine, riebeckite, augite, fayalite, arfvedsonite, hedenbergite, and ilmenite.