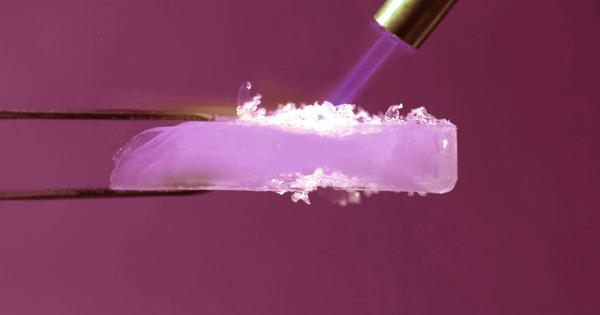 Aerogel is a synthetic porous ultralight material derived from a gel, in which the liquid component for the gel has been replaced with gas without significant collapse of the gel structure.  ‘Aerogel’ is not a specific mineral or material with a set chemical formula-rather, the term is used to encompass all materials with a specific geometrical structure. It was first created in 1931 by Samuel Stephens Kistler, with carbon aerogels first introduced in the 1980s.

“The majority of aerogel is composed of silica, but carbon, iron oxide, organic polymers, semiconductor nanostructures, gold, and copper can also form aerogel.”

The result is a solid with extremely low density and extremely low thermal conductivity. This structure is an extremely porous, solid foam, with high connectivity between branched structures of a few nanometres across. Nicknames include frozen smoke, solid smoke, solid air, solid cloud, blue smoke owing to its translucent nature, and the way light scatters in the material. Though aerogel is technically a foam, it can take many different shapes and forms. The majority of aerogel is composed of silica, but carbon, iron oxide, organic polymers, semiconductor nanostructures, gold, and copper can also form aerogel. Silica aerogels feel like fragile expanded polystyrene to the touch, while some polymer-based aerogels feel like rigid foams. Aerogels can be made from a variety of chemical compounds. within the aerogel structure, very little is a solid material, with up to 99.8% of the structure consisting of nothing but air. This unique composition gives aerogel an almost ghostly appearance; hence it is often referred to as ‘frozen smoke’. 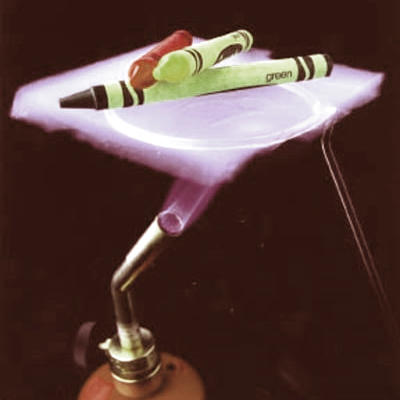 Aerogel was first created by Samuel Stephens Kistler in 1931, as a result of a bet with Charles Learned over who could replace the liquid in “jellies” with gas without causing shrinkage. Aerogel is starting to become a must-have material in the insulation industry and has been used for several years in cavity injected wall insulation and insulating boards. They were also used as cigarette filters and insulation for freezers.

Aerogels are produced by extracting the liquid component of a gel through supercritical drying or freeze-drying. One of the best known and most useful physical properties of aerogel is its incredible lightness-it typically has a density between 0.0011 to 0.5 g cm-3, with a typical average of around 0.020 g cm-3. This allows the liquid to be slowly dried off without causing the solid matrix in the gel to collapse from capillary action, as would happen with conventional evaporation. This means that aerogel is usually only 15 times heavier than air, and has been produced at a density of only 3 times that of air. The first aerogels were produced from silica gels. Kistler’s later work involved aerogels based on alumina, chromium, and tin dioxide. Carbon aerogels were first developed in the late 1980s.