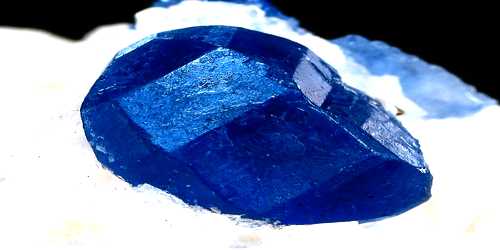 Afghanite was named after Afghanistan, the country where it was first discovered. Afghanite formula- (Na,K)22Ca10[Si24Al24O96](SO4)6Cl6, is a hydrous sodium, calcium, potassium, sulfate, chloride, carbonate alumino-silicate mineral. It belongs to the cancrinite group. It forms sapphire-blue crystals. It can produce attractive gemstones but gem rough is almost unobtainable and good crystals are rare. It is a feldspathoid of the cancrinite group and typically occurs with sodalite group minerals.

The density of Afghanite is 2.55 to 2.65 g/cm3, with a hardness of 5.5 to 6 – between a knife blade and orthoclase. It forms blue to colorless, typically massive crystals in the trigonal crystal system. Afghanite can be identified in the field by its blue color. It can also be colorless. Its transparent form has {1010} perfect cleavage. This mineral has a vitreous luster, with a white streak. The fracture of this mineral is conchoidal. The lowering of the symmetry from typical (for cancrinite group) hexagonal one is due to an ordering of Si and Al. It was discovered in 1968 in the Lapis-lazuli Mine, Sar-e-Sang, Badakhshan Province, Afghanistan and takes its name from that country. It has also been described from localities in Germany, Italy, the Pamir Mountains, Tajikistan, near Lake Baikal in Siberia, New York, and Newfoundland. It occurs as veinlets in lazurite crystals in the Afghan location and in altered limestone xenoliths within pumice in Pitigliano, Tuscany, Italy.

It is used as a gemstone.

It occurs in thin veinlets cutting lazurite crystals; in silicified limestone xenoliths in pumice. It is often associated with minerals such as sodalite, nepheline, lazurite, olivine, vesuvianite, calcite, diopside, pyrite, and phlogopite.