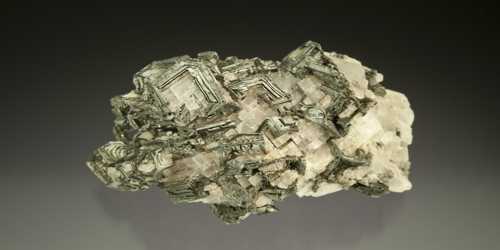 Aguilarite is an uncommon sulfosalt mineral with formula Ag4SeS. It was described in 1891 and was named after Ponciano Aguilar, the former superintendent of the San Carlos Mine, Guanajuato, Mexico, where the material was originally located.

Aguilarite is bright lead-gray on fresh surfaces but becomes dull iron black when exposed to air. In the late 19th century, Ponciano Aguilar, superintendent of the San Carlos mine in Guanajuato, Mexico, found several specimens of a mineral thought to be naumannite. The samples were given to F. A. Genth for identification, who, along with S. L. Penfield, discovered that it was a new mineral. The mineral was described in the American Journal of Science in 1891 and named aguilarite in honor of Ponciano Aguilar.

Aguilarite can be identified in the field by its color variations, such as gray, iron-gray, and black. Its opaque form has no cleavage. This mineral has an adamantine–metallic luster, with a grayish-black streak. The fracture of this mineral is hackly-jagged, torn surfaces.

It is often associated with minerals such acanthite, silver, naumannite, proustite, pearceite, quartz, calcite, and stephanite. The mineral is known from a number of countries in North and South America, Europe, Asia, and Australasia. Aguilarite occurs in association with acanthite, calcite, naumannite, pearceite, proustite, silver, stephanite, and quartz.