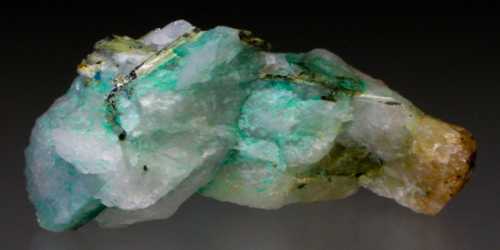 Aikinite is a sulfide mineral of lead, copper, and bismuth with formula PbCuBiS3. It forms black to grey or reddish brown acicular orthorhombic crystals with a Mohs hardness of 2 to 2.5 and a specific gravity of 6.1 to 6.8. It was originally found in 1843 in the Beryozovskoye deposit, Ural Mountains. It is named after Arthur Aikin, an English chemist, mineralogist, and founder and Secretary of the Geological Society of London, England. Aikinite is an uncommon mineral that is found in hydrothermal veins in localities in Russia, Slovakia, France, the United States, Mexico, and many others. Minerals associated with Aikinite include gold, pyrite, galena, tennantite, bismuthinite, enargite, chalcopyrite, and quartz.

It has been found in Western Tasmania, in mines located near Dundas, Tasmania. Aikinite can be identified in the field by its color variations, such as lead-gray, grayish-black, and reddish-brown. Its opaque form has {010} indistinct cleavage. This mineral has a metallic luster, with grayish streak. The density of aikinite is 6.1 to 6.8 g/cm3, with a hardness of 2 to 2.5 – between gypsum and finger nail.

Aikinite occurs uncommonly in hydrothermal veins. It is often associated with minerals such as gold, tennantite, bismuthinite, pyrite, galena, enargite, quartz, and chalcopyrite.