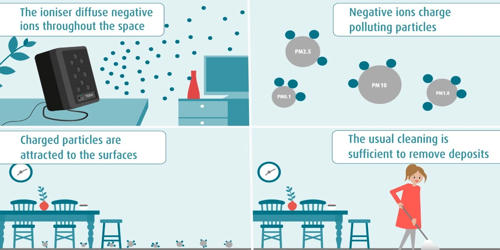 An air ionizer is one of the most popular air filters being used by the air purifiers. It is a device that uses high voltage to ionize (electrically charge) air molecules. It is a device that uses high voltage electricity to create negative ions and electrically charge the air molecules. Negative ions, or anions, are particles with one or more extra electrons, conferring a net negative charge to the particle. Instead of using the fan to pull in the polluted air into a physical air filter, the standalone air ionizer uses the electricity to emit the cloud of negative ions (or anions) to electrically charge the air molecules. Cations are positive ions missing one or more electrons, resulting in a net positive charge. As a result, the negative ions charge and attract the airborne particles to fall onto the nearby either charged collector plate or mechanical air filter or simply the nearest walls and ceilings. They work by emitting negative ions into the room, which binds to positive ions such as dust.  The negatively charged ions that the device emits will bind to larger molecules in the air, such as dust and pollen.

In real-world use, the air ionizer is one important air filtration being used in air purifiers. Some commercial air purifiers are designed to generate negative ions. Another type of air ionizer is the electrostatic discharge (ESD) ionizer (balanced ion generator) used to neutralize the static charge. Air ionizers make the air in a room healthier for people to breathe, especially for people suffering from allergies, asthma, and other respiratory-related ailments. In 2002, in an obituary in The Independent newspaper, Cecil Alfred ‘Coppy’ Laws was credited with being the inventor of the domestic air ionizer. However, when the ionizer purifies the air, it also creates the ionized air and humans don’t normally breathe this type of air in our lungs. Moreover, the charged ions will produce an amount of ozone, which is unwanted. Though evidence shows that air ionizers purify the air of bacteria, dust, cigarette smoke, molds, soot, pollen, and household odors. This has a significant impact on people suffering from hay fever and other seasonal allergies.

The air ionizer plays an important role in the air purifier industry, as you can maintain the air ionizer without the annual filter replacement and still get the best result of air filtration. Some ionizers come complete with a special electrostatic collection plate that attracts these heavy particles and traps them on its surface. Air ionizers coupled with electrostatically positively charged collector plates have been used to eliminate the occurrence of airborne bacterial infections, lower airborne viral infections and to reduce static electricity build-up in electronics. This plate must be washed regularly, but it can be reused over and over again without losing its effectiveness.