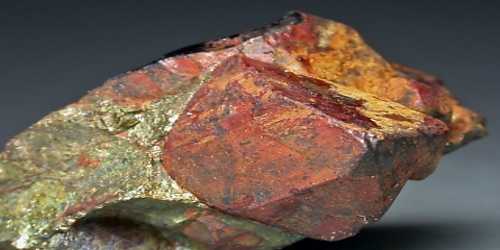 Akaganeite is an iron(III) oxide-hydroxide / chloride mineral with formula: Fe3+O(OH,Cl). It is a chlorine mineral/iron (III) oxide-hydroxide that is formed by the weathering pyrrhotite. Nickel also has been reported in the structure. It has a monoclinic crystal structure, a metallic luster, and a brownish yellow streak.

Akaganeite is named after the Akagane mine in Iwate, Japan, where it was first discovered. It has also been found in widely dispersed locations around the world and in rocks from the Moon that was brought back during the Apollo Project. The occurrences in meteorites and the lunar sample are thought to have been produced by interaction with Earth’s atmosphere. Akaganeite can be identified in the field by its brown and rusty brown opaque appearance. It has an adamantine-metallic lusture with a brownish yellow streak. This mineral forms a loose and poorly-coherent pulverulent mass.

Akaganeite occurs in certain geothermal brines, oxidation zones of pyrrhotite-bearing iron sulphide deposits and sea-floor nodules. Akaganeite is formed as a corrosion product of some meteorites.