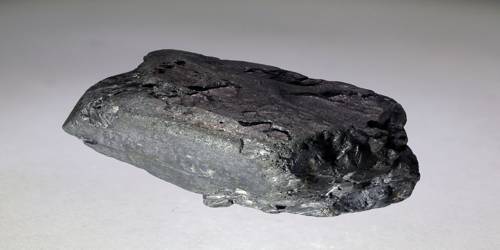 Alabandite is a rarely occurring manganese sulfide mineral. The name is derived from its supposed discovery locality at Alabanda, Turkey. It crystallizes in the cubic crystal system with the chemical composition Mn2+S and develops commonly massive to granular aggregates, but rarely also cubic or octahedral crystals to 1 cm. It is an uncommon sulfide with a fairly simple chemical formula.

Alabandite was first described in 1784 by Franz-Joseph Müller, an Austrian mineralogist and mining engineer. The name Alabandite is derived from the Alabanda Region of Ayden, Turkey. However, this region is not a known producer of this mineral. The pink color of MnS likely results from poor coupling between the lowest energy unoccupied Mn orbitals, resulting in discrete states rather than a delocalized band.

Alabandite forms in epithermal polymetallic sulfide veins and low-temperature manganese deposits. It is said to assist the body in maintaining balance and to move in a calm and co-ordinated way. It occurs with acanthite, calcite, chalcopyrite, galena, pyrite, quartz, rhodochrosite, rhodonite, sphalerite and native tellurium. Sometimes it was found in meteorites. It is believed to be good in relieving clumsiness and is claimed to help with problems of the inner ear that may be causing balance issues.