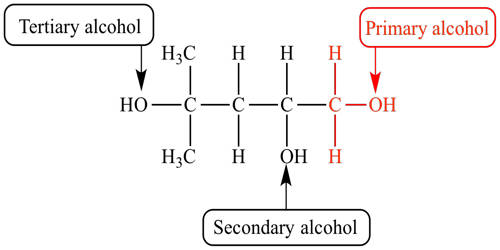 Alcohol is the ingredient found in beer, wine, and spirits that causes drunkenness. In chemistry, it is an organic compound that carries at least one hydroxyl functional group (−OH) bound to a saturated carbon atom. It is a class of organic compounds characterized by one or more hydroxyl (―OH) groups attached to a carbon atom of an alkyl group. It is formed when yeast ferments (breaks down without oxygen) the sugars in different food.

The term alcohol originally referred to the primary alcohol ethanol (ethyl alcohol), which is used as a drug and is the main alcohol present in alcoholic beverages. It is a homologous series in which the compounds contain a functional group called the hydroxyl group (-OH). An important class of alcohols, of which methanol and ethanol are the simplest members, includes all compounds for which the general formula is CnH2n+1OH. The hydroxyl group is also responsible for imparting certain chemical and/or physical properties to the compound. Simple mono alcohols that are the subject of this article include primary (RCH2OH), secondary (R2CHOH) and tertiary (R3COH) alcohols.

In general, the hydroxyl group makes alcohol polar. Alcohol molecules are organic molecules that contain an -OH group. Those groups can form hydrogen bonds to one another and to most other compounds. Owing to the presence of the polar OH alcohols are more water-soluble than simple hydrocarbons. Methanol, ethanol, and propanol are miscible in water. If the hydroxyl (-OH) group is attached to a methane backbone, the compound is called methanol or methyl alcohol.

Alcohols may be considered as organic derivatives of water (H2O) in which one of the hydrogen atoms has been replaced by an alkyl group, typically represented by R in organic structures. Because of hydrogen bonding, alcohols tend to have higher boiling points than comparable hydrocarbons and ethers. The boiling point of the alcohol ethanol is 78.29°C, compared to 69°C for the hydrocarbon hexane, and 34.6°C for diethyl ether.

Simple alcohols are found widely in nature. Ethanol is most prominent because it is the product of fermentation, a major energy-producing pathway. The other simple alcohols are formed in only trace amounts. More complex alcohols are pervasive, as manifested in sugars, some amino acids, and fatty acids.

Alcohols have a long history of myriad uses. For simple mono-alcohols, which is the focus on this article, the following are the most important industrial alcohols:

They are used as sweeteners and in making perfumes, are valuable intermediates in the synthesis of other compounds, and are among the most abundantly produced organic chemicals in industry.