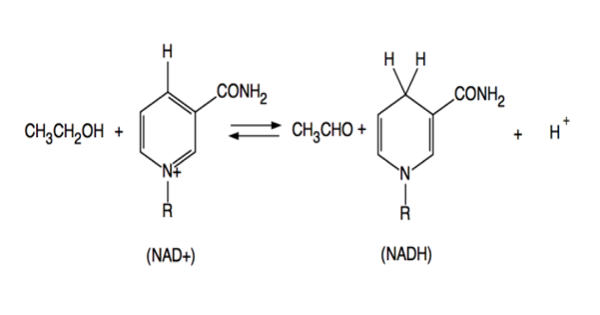 Alcohol dehydrogenases (ADH) are a group of dehydrogenase enzymes that occur in many organisms and facilitate the interconversion between alcohols and aldehydes or ketones with the reduction of nicotinamide adenine dinucleotide (NAD+) to NADH. ADH refers to a family of enzymes that catalyze the reversible oxidation of primary or secondary alcohols to aldehydes or ketones, respectively. Alcohol dehydrogenases are a class of zinc enzymes that catalyze the oxidation of primary and secondary alcohols to the corresponding aldehyde or ketone by the transfer of a hydride anion to NAD+ with the release of a proton.

In humans and many other animals, they serve to break down alcohols that otherwise are toxic, and they also participate in the generation of useful aldehyde, ketone, or alcohol groups during the biosynthesis of various metabolites. It is located in the cytosol of stomach and liver cells and functions as the main enzyme for alcohol metabolism. In yeast, plants, and many bacteria, some alcohol dehydrogenases catalyze the opposite reaction as part of fermentation to ensure a constant supply of NAD+. ADH is the major enzyme responsible for alcohol metabolism in the liver, at normal physiological conditions.

The alcohol dehydrogenases comprise a group of several isozymes that catalyze the oxidation of primary and secondary alcohols to aldehydes and ketones, respectively, and also can catalyze the reverse reaction. In mammals, this is a redox (reduction/oxidation) reaction involving the coenzyme nicotinamide adenine dinucleotide (NAD+).

Alcohol dehydrogenases (ADHs), which belong to the oxidoreductase superfamily, catalyze the interconversion between alcohols and aldehydes or ketones with high stereoselectivity under mild conditions. ADHs are widely employed as biocatalysts for the dynamic kinetic resolution of racemic substrates and for the preparation of enantiomerically pure chemicals.

ADH has many roles in the body. One major function is to catalyze the oxidation of ethanol to acetaldehyde as the first step in ethanol metabolism by the liver. Dehydrogenases are used as enzymes for the oxidation and reduction of carbonyl groups, respectively alcohols. The enzymes are mostly NAD(P)H-dependent. For the reduction of aldehydes and ketones, baker yeast is often used.