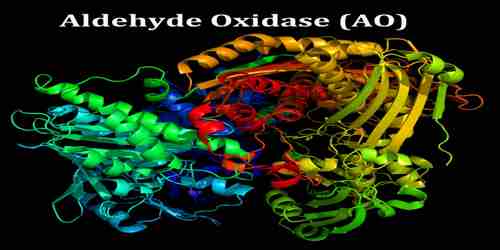 Aldehyde oxidase (AO) is a molybdenum-containing oxidoreductase that is similar to xanthine oxidase, also a molybdoenzyme. It catalyzes the oxidation of aldehydes into carboxylic acid, and in addition, catalyzes the hydrozylation of some heterocycles. It can also catalyze the oxidation of both cytochrome P450 (CYP450) and monoamine oxidase (MAO) intermediate products. AO plays a very important role in the metabolization of numerous drugs. Aldehyde oxidase is an aldehyde oxidoreductase expressed predominantly in the LIVER; LUNGS; and KIDNEY. It catalyzes the oxidation of a variety of organic aldehydes and N-heterocyclic compounds to CARBOXYLIC ACIDS, and also oxidizes quinoline and pyridine derivatives. The enzyme utilizes molybdenum cofactor and FAD as cofactors.

Aldehyde oxidase might be of particular interest for certain chemotypes, because in addition to the oxidation of aldehydes to carboxylic acids it is also responsible for the oxidation of nitrogen-containing heterocyclic systems such as pyridines, diazines, benzimidazoles, purines and a wide variety of other fused heteroaromatic systems. Structure and Reactions of Aldehyde Oxidase

Recently the crystal structures of human AOX1, in its substrate-free form PDB ID: 4UHW, as well as in complex with both the substrate, phthalazine (red, space filling), and the inhibitor, thioridazine (blue, stick) PDB ID: 4UHX, have been reported DOI, the molybdenum cofactor is shown in green.

Aldehyde oxidase (AO) is very similar in amino acid sequence to xanthine oxidase (XO). The active site of AO has been found to have a superimposed structure to that of XO, in studies involving mouse liver. AO is a homodimer, and requires FAD, molybdenum (MoCo) and two 2FE-2S clusters as cofactors.

AO catalyzes the conversion of an aldehyde in the presence of oxygen and water to an acid and hydrogen peroxide. *an aldehyde + H2O + O2 ⇌ a carboxylate + H2O2 + H+