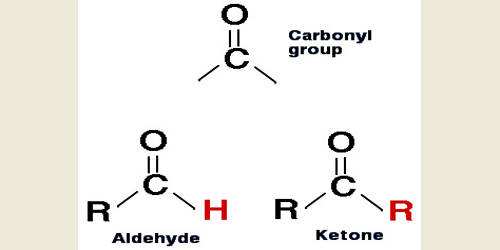 Any organic compound consisting of a carbonyl group attached to a hydrogen atom and any other R-group. Many aldehydes have pleasant odors, and in principle, they are derived from alcohols by dehydrogenation, from which process came the name aldehyde. A functional group characterized by a carbonyl group flanked by a hydrogen atom on one side and carbon on the other.

It is a compound containing a functional group with the structure −CHO, consisting of a carbonyl center (a carbon double-bonded to oxygen) with the carbon atom also bonded to hydrogen and to an R group, which is any generic alkyl or side chain. The double bond between carbon and oxygen is characteristic of all aldehydes and is known as the carbonyl group. The group—without R—is the aldehyde group, also known as the formyl group. They are common in organic chemistry, and many fragrances are or contain aldehydes. They undergo a wide variety of chemical reactions, including polymerization.

Aldehydes have properties that are diverse and that depend on the remainder of the molecule. In formaldehyde, the simplest aldehyde, the carbonyl group is bonded to two hydrogen atoms. Smaller aldehydes are more soluble in water, formaldehyde, and acetaldehyde completely so. The volatile aldehydes have pungent odors. In condensed structural formulas, the carbonyl group of an aldehyde is commonly represented as ―CHO.

Aldehydes, particularly arylaldehydes, degrade in the air via the process of autoxidation. The acyl hydroperoxide is generated, which comproportionates with the starting material to generate two equivalents of the carboxylic acid. The carbon atoms bonded to the carbonyl group of an aldehyde may be part of saturated or unsaturated alkyl groups, or they may be alicyclic, aromatic, or heterocyclic rings. Old bottles of benzaldehyde, a liquid, will often accumulate a crusty solid on the bottle cap or even suspended in the bulk liquid. This material is benzoic acid, which can be removed by using a base wash followed by distillation. Aldehydes are strong electrophiles that can undergo addition reactions with thiols and amines to form toxic adducts in cellular proteins. Electronically, they have only one R group to supply electrons toward the partially positive carbonyl carbon, while ketones have two electron‐supplying groups attached to the carbonyl carbon.

They are useful as solvents and perfume ingredients and as intermediates in the production of dyes and pharmaceuticals. Of all aldehydes, formaldehyde is produced on the largest scale, about 6000000 tons per year. It is mainly used in the production of resins when combined with urea, melamine, and phenol (e.g., Bakelite). It is a precursor to methylene diphenyl diisocyanate (“MDI”), a precursor to polyurethanes.

The second main aldehyde is butyraldehyde, of which about 2500000 tons per year are prepared by hydroformylation. It is the principal precursor to 2-ethyl hexanol, which is used as a plasticizer. Many other aldehydes find commercial applications, often as precursors to alcohols, the so-called oxo alcohols, which are used in detergents.