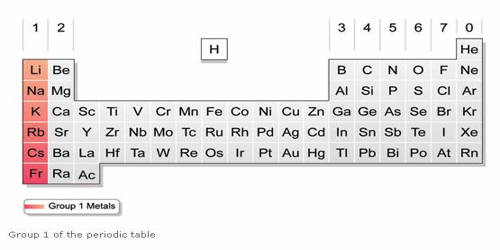 Any of the metallic elements belonging to Group 1 of the periodic table: lithium (Li), sodium (Na), potassium (K), rubidium (Rb), cesium (Cs), and francium (Fr). They are any of the elements found in Group IA of the periodic table. They are very reactive, electropositive, monovalent metals forming strongly alkaline hydroxides. All elements in the alkali metal group occur in nature. These metals are called alkali metals because they form alkalies( i.e. strong bases capable of neutralizing acids) when they react with water.

The alkali metals consist of the chemical elements lithium (Li), sodium (Na), potassium (K), rubidium (Rb), cesium (Cs), and francium (Fr). Together with hydrogen, they constitute group 1, which lies in the s-block of the periodic table. The International Union of Pure and Applied Chemistry (IUPAC) excludes hydrogen (H) as an alkali metal because it occurs as a gas under ordinary temperatures and pressures. All alkali metals have their outermost electron in an s-orbital: this shared electron configuration results in their having very similar characteristic properties. They have the tendency to lose an electron to complete their octet so they are strongly electropositive and very reactive in nature. Indeed, the alkali metals provide the best example of group trends in properties in the periodic table, with elements exhibiting well-characterized homologous behavior. This family of elements is also known as the lithium family after its leading element. 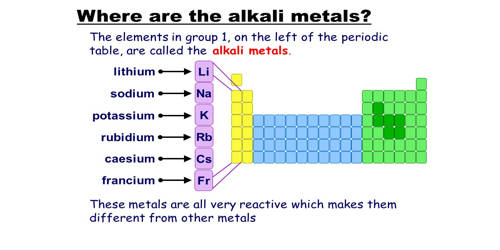 Characteristics of alkali metals are:

The alkali metals are all shiny, soft, highly reactive metals at standard temperature and pressure and readily lose their outermost electron to form cations with charge +1. All of the metals react vigorously with water, with the energy of the reaction increases as you move down the periodic table. They can all be cut easily with a knife due to their softness, exposing a shiny surface that tarnishes rapidly in air due to oxidation by atmospheric moisture and oxygen (and in the case of lithium, nitrogen). Because of their high reactivity, they must be stored under oil to prevent reaction with air, and are found naturally only in salts and never as the free elements. Cesium, the fifth alkali metal, is the most reactive of all the metals. All the alkali metals react with water, with the heavier alkali metals reacting more vigorously than the lighter ones. They are a group of chemical elements from the s-block of the periodic table with similar properties: they appear silvery and can be cut with a plastic knife.