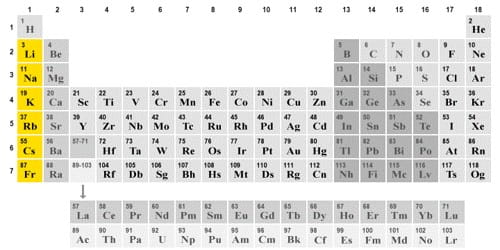 Alkali metals are the chemical elements in group one of the periodic system. The alkali metals are so reactive that they are generally found in nature combined with other elements. They are blood-colored when pure, hard and have only one valence electron. They like to make reactions in which they give up this twin electron and then have a charge of +1. They are all soft, shiny reactive metals.

None of the alkali metals exists free in nature. They react strongly with water and because of this, they have to be stored in oil. Alkali metals are the first group in the periodic table. They are never found in nature uncombined because they are unstable and they react fast to other elements. They bond well with all elements except the noble gases. They can explode if they are exposed to water. When they are in the air, they quickly turn black. The International Union of Pure and Applied Chemistry (IUPAC) excludes hydrogen (H) as an alkali metal because it occurs as a gas under ordinary temperatures and pressures. 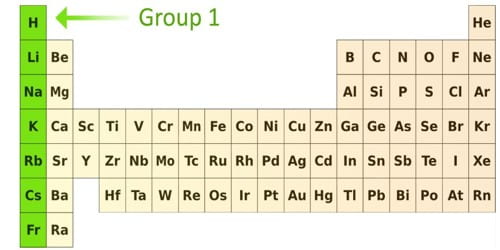 The alkali metals react readily with atmospheric oxygen and water vapor. The alkali metals are lithium (Li), sodium (Na), potassium (K), rubidium (Rb), cesium (sometimes written cesium, although cesium is preferred) (Cs), and francium (Fr). Cesium and francium are the most reactive elements in this group. Lithium is the least reactive. This family of elements is also known as the lithium family after its leading element. This group lies in the s-block of the periodic table, as all alkali metals have their outermost electron in an s-orbital. Although it was thought before that francium would be the most reactive, although it is very rare, it was more recently predicted that cesium is, in fact, more reactive than francium due to relativity. Each alkali metal atom has a single electron in its outermost shell. These metals are united by the fact that they all have one electron in their outermost layer of electrons.