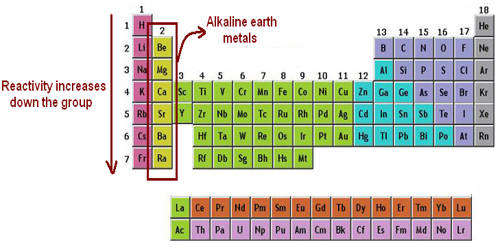 The alkaline earth metals are the second most reactive family of elements. They are any of the metallic elements belonging to Group 2 of the periodic table: beryllium (Be), magnesium (Mg), calcium (Ca), strontium (Sr), barium (Ba), and radium (Ra). They are called alkaline earth metals because they form alkaline solutions (hydroxides) when they react with water.  They all have low densities, melting points, and boiling points, and they tend to form solutions with a pH greater than 7.

The alkaline earth metals are six chemical elements in group 2 of the periodic table. They are beryllium (Be), magnesium (Mg), calcium (Ca), strontium (Sr), barium (Ba), and radium (Ra). The elements have very similar properties: they are all shiny, silvery-white, somewhat reactive metals at standard temperature and pressure. Thus, these metals form very basic solutions and are excellent for reducing agents. 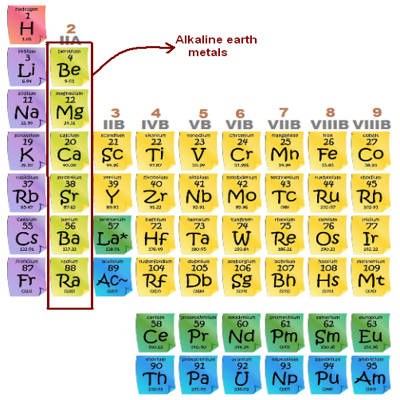 They rarely occur in their pure form, however, because they are very reactive. All the discovered alkaline earth metals occur in nature, although radium occurs only through the decay chain of uranium and thorium and not as a primordial element. Because of their reactivity, the alkaline metals are not found free in nature. There have been experiments, all unsuccessful, to try to synthesize element 120, the next potential member of the group. These metals readily lose their two outermost electrons to form cations with a 2+ charge.

Some characteristics of alkaline earth metals are:

Magnesium and calcium are very common in the earth’s crust, being respectively the fifth- eighth-most-abundant elements. Calcium is needed for healthy bones, and plants need magnesium to form the chlorophyll molecules they use for photosynthesis. None of the alkaline earth metals are found in their elemental state. Common magnesium-containing minerals are carnallite, magnesite, and dolomite. Common calcium-containing minerals are chalk, limestone, gypsum, and anhydrite. Magnesium and calcium are ubiquitous and essential to all known living organisms.

Strontium is the fifteenth-most-abundant element in the Earth’s crust. Strontium is important to sea life, particularly for hard corals, which use strontium to build their exoskeletons. The principal minerals are celestite and strontianite. Barium is slightly less common, much of it in the mineral barite.

Radium, is a decay product of uranium, is found in all uranium-bearing ores. Due to its relatively short half-life, radium from the Earth’s early history has decayed, and present-day samples have all come from the much slower decay of uranium.