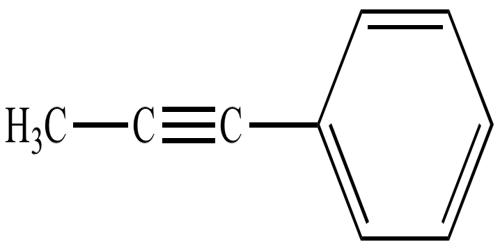 Alkynes are traditionally known as acetylenes, although the name acetylene also refers specifically to C2H2, known formally as ethyne using IUPAC nomenclature. Because alkynes have triple bonds in their chemical structure and consist of carbon and hydrogen atoms, they are unsaturated hydrocarbons. Like other hydrocarbons, alkynes are generally hydrophobic but tend to be more reactive.

Alkynes are characteristically more unsaturated than alkenes. They can be prepared by elimination reactions under conditions similar to those used to form alkenes. Thus they add two equivalents of bromine whereas an alkene adds only one equivalent in a reaction with hydrobromic acid. Other reactions are listed below. In some reactions, alkynes are less reactive than alkenes. For example, in a molecule with an -ene and an -yne group, addition occurs preferentially at the -ene. They are unsaturated hydrocarbons. Like alkenes have the suffix –ene, alkynes use the ending –yne; this suffix is used when there is only one alkyne in the molecule.

Possible explanations involve the two π-bonds in the alkyne delocalizing, which would reduce the energy of the π-system or the stability of the intermediates during the reaction. Because an alkyne has two π bonds, two molar equivalents of HX must be eliminated from the starting material. They show a greater tendency to polymerize or oligomerize than alkenes do. The resulting polymers, called polyacetylenes (which do not contain alkyne units) are conjugated and can exhibit semiconducting properties.

Like previously mentioned, the IUPAC rules are used for the naming of alkynes.