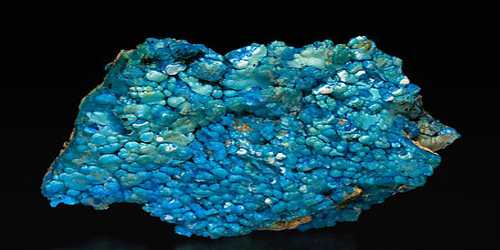 Allophane is amorphous to poorly crystalline hydrous aluminum silicate clay mineraloid. Its chemical formula is Al2O3·(SiO2)1.3-2·(2.5-3)H2O. It is not Radioactive. Since it has short-range atomic order, it is a mineraloid, rather than a mineral, and can be identified by its distinctive infrared spectrum and its X-ray diffraction pattern. It is a variously colored amorphous mineral consisting of hydrated aluminum silicate and occurring in cracks in some sedimentary rocks.

It was named after the Greek allos – “other” and phanos – “to appear”, as it gave a deceptive reaction in the blowpipe flame in old mineralogical testing. It was first described in 1816 in Gräfenthal, Thuringia, Germany. Certain distinctive characteristics can be attributed to the spherical shape of allophane.

Allophane is a widely distributed clay mineral. Although characteristic of soils derived from volcanic ash, it has also been identified in Podzols and podzolised soils. It forms waxy botryoidal to crusty masses with color varying from white through green, blue, yellow, to brown. It has a Mohs hardness of 3 and a specific gravity of 1.0. It typically forms under mildly acidic to neutral pH (5-7). Its structure has been debated, but it is similar to clay minerals and is composed of curved alumina octahedral and silica tetrahedral layers. Transmission electron micrographs show that it is generally made up of aggregates of hollow spherules ~3-5 nm in diameter. Allophane can alter to form halloysite under resilicating aqueous conditions and can alter to form gibbsite under desilicating conditions. A copper-containing variety cupro-allophane has been reported.

Allophane is a weathering or hydrothermal alteration product of volcanic glass and feldspars and sometimes has a composition similar to kaolinite but generally has a molar ratio of Al: Si = 2. The apparent specific surface is high and is decreased markedly on drying, thus enabling the external and internal surface areas and hence diameters of the spherules to be calculated. High phosphate retention is characteristics.