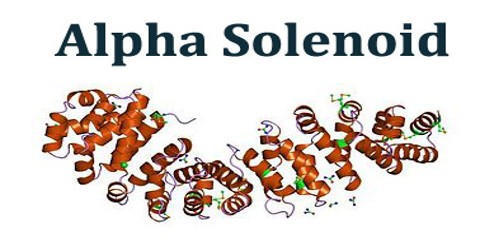 Alpha Solenoid is a protein fold composed of repeating alpha helix subunits, commonly helix-turn-helix motifs, arranged in antiparallel fashion to form a superhelix. It also known as an alpha horseshoe or as stacked pairs of alpha helices, abbreviated SPAH. Alpha solenoids are known for their flexibility and plasticity. Like beta propellers, alpha solenoids are a form of solenoid protein domain commonly found in the proteins comprising the nuclear pore complex. They are also common in membrane coat proteins known as coatomers, such as clathrin, and in regulatory proteins that form extensive protein-protein interactions with their binding partners. Alpha Solenoids were composed of helix-turn-helix motifs that stacked into an open superhelix. However, protein structural classification systems have used varying terminology; the Structural Classification of Proteins (SCOP) database describes these proteins using the term “alpha alpha superhelix”. The CATH database uses the term “alpha horseshoe” for these proteins, and uses “alpha solenoid” for a somewhat different and more compact structure exemplified by the peridinin-chlorophyll binding protein.

Structure and Functions of Alpha Solenoids

Detection of alpha-solenoids from protein sequence alone is relevant because such a prediction allows defining the secondary and tertiary structure of a large part of a protein with relatively high precision. Analysis of protein sequence similarity is generally a good tool to discover many types of protein repeats. However, the extreme sequence divergence of alpha-solenoids limits the application of such methods to these repeats. Accordingly, although the major domain databases (e.g. PFAM and SMART) contain profiles for repeats such as HEAT and Armadillo, their level of detection is poor. Methods of the prediction of these repeat types include iterative detection and Hidden Markov Model based searches of profiles derived from proteins of known structure. The resolution of novel protein structures of alpha-solenoids, some of them lacking sequence similarity to previously defined alpha-solenoid proteins, offered a chance to enhance the algorithm’s training set and performance.

Though alpha-solenoids usually form a surface for protein-protein interactions and are consequently located in the outer part of proteins, sometimes even shaping the complete structure of the protein, they can also be buried.

Alpha-Solenoids can interact with nucleic acids –

Support for interaction with proteins is not the only function of alpha-solenoids. Exportin-5 is one example of alpha-solenoid interacting with nucleic acids. In this protein-RNA structure, exportin binds immature pre-microRNA in complex with RanGTP. The repeats form a big hairpin that wraps around the RNA. Interestingly, the authors of point out that the RNA is only bound to the repeats via its backbone, which means that binding of exportin-5 to small RNA is independent of its nucleotide sequence. Exportin-5 both transports premature miRNAs from nucleus to cytoplasm and protects them from degradation by nucleases.

Alpha-Solenoids can interact with lipids –

We report two alpha-solenoid protein structures with bound lipids. Lipovitellin is mainly formed of an open cone of HEAT repeats inside of which lipids contact the protein. To our knowledge, this is the first structure showing direct contact of an alpha-solenoid with lipids. The GGTase-I (geranylgeranyltransferase-I), is another alpha-solenoid that binds lipids. This protein catalyzes the fusion of lipids on proteins. Approximately half of its structure displays HEAT repeats. Alpha solenoids feature prominently in the proteins making up the nuclear pore complex (NPC); alpha solenoid and beta propeller domains together account for up to half of the core NPC scaffold by mass. A large number of the conserved nucleoporin proteins forming the NPC are either alpha solenoid proteins or consist of a beta propeller domain at the N-terminus and an alpha solenoid at the C-terminus. This latter domain architecture also occurs in clathrin and Sec31, and was thought to be unique to eukaryotes, though a few examples have been reported in planctomycetes.

Due to their propensity for forming large interaction surfaces well-suited to protein-protein interactions, and their flexible surfaces permitting binding of various cargo molecules, alpha solenoid proteins commonly function as transport proteins, particularly in transport between the nucleus and the cytoplasm. For example, the beta-karyopherin superfamily consists of alpha solenoid proteins formed from HEAT repeats; importin beta is a member of this family, and its adaptor protein importin alpha is an alpha solenoid formed from Armadillo repeats. Transporters of other molecules, such as RNA, can also be of alpha solenoid architecuture, as in exportin-5 or pentatricopeptide-repeat-containing RNA-binding proteins, which are particularly common in plants.