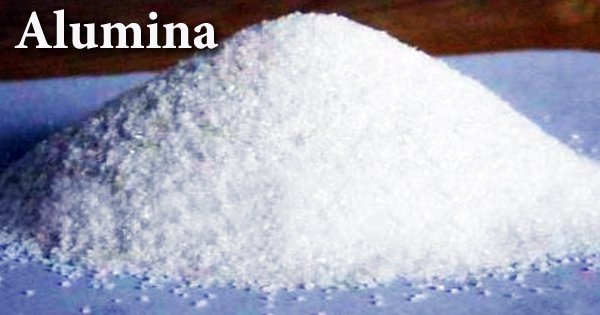 Alumina, also known as aluminum oxide, is an aluminum-oxygen chemical compound with the formula Al2O3. It is a crystalline powder that is white or nearly colorless and is used as a starting material for the smelting of aluminum metal. It crystallizes as well-developed hexagonal crystals in the trigonal scheme. Depending on the shape or use, it’s also known as aloxide, aloxite, or alundum. It’s also used as a raw material for a variety of advanced ceramic products and as a chemical processing agent.

Aluminum oxide that can be found in nature as bauxite, corundum, and other minerals. It’s used in the production of dental cements and refractories as an adsorbent, desiccating agent, and catalyst. The mineral corundum, whose varieties form the precious gemstones ruby and sapphire, contains alumina in its crystalline polymorphic phase -Al2O3. Since it is chemically resistant to weathering, it can be found in alluvial (placer) deposits. It is used as an abrasive and is the second hardest mineral after diamond (hardness of 9 on the Mohs scale).

Alumina serves as the main constituent of aluminum, but it is also used in a variety of other uses due to its unique combination of properties. The purity of the ceramic (i.e., the ratio of alumina to additive agents) is also used to distinguish different grades, with higher purities usually indicating greater strength, corrosion resistance, and wear resistance. The Aluminon collection of alumina ceramics from International Syalons is an example of this:

The Bayer process produces pure alumina, which is needed for the Hall process to produce aluminum. Bauxite (Al2O3?nH2O) is the starting material. Impurities such as SiO2, Fe2O3, TiO2, and Na2O can be found in the ore. Corundum is the most common crystalline type of aluminum oxide found in nature. Rubies and sapphires are gem-quality varieties of corundum that get their colors from trace impurities. Alumina has a number of properties that make it useful not only for aluminum but also for a variety of other applications:

Water does not dissolve alumina. Its hardness makes it suitable for use as an abrasive and as a component in cutting tools in its most common crystalline form, corundum or -aluminium oxide. As a result, it ranks second only to silicon carbide (SiC) as one of the toughest engineered ceramics. This high hardness is followed by excellent abrasion and wear resistance, excellent thermal conductivity, and excellent chemical resistance.

Various aluminum hydroxides, such as α- and β-trihydrates, α-monohydrate, and alumina gel, are used to make activated aluminas of the amorphous kind, as well as transition aluminas of the γ, η, χ, and ρ types. The Bayer process can also be used to produce certain chemicals from bauxite. Alumina (Aluminium oxide) is an amphoteric element, which means it reacts with both acids and bases, such as hydrofluoric acid and sodium hydroxide, acting as an acid with a base and a base with an acid, neutralizing one and forming a salt.

The toughest, highest, and stiffest of the oxides are alumina ceramics. They also have excellent electrical resistivity and dielectric strength, are chemically resistant, and are unaffected by air, water vapor, or sulfurous atmospheres. They are, however, relatively poor in refractoriness, with a melting point of just 2039°C, and maintain just around 10% of room-temperature power at 1371°C. The majority of world bauxite production (approximately 85 percent) is used as feed for the Bayer process, which uses a wet chemical caustic leach method to produce alumina.

The majority of the alumina developed as a result of this refining method is then used as a feedstock for the all-Héroult process, which involves electrolytic reduction of alumina in a molten bath of natural or synthetic cryolite (Na3AlF6) to produce aluminum metal. Alumina’s high hardness and near dimensional resistance capability make it ideal for abrasion-resistant parts like textile guides, pump plungers, chute linings, discharge orifices, dies, and bearings, in addition to its large use as electrical insulators and chemical and aerospace applications.

Because of its superior toughness and resilience, alumina is commonly used in a variety of industrial abrasive materials. Similarly, alumina can be used as an abrasion-resistant coating. Due to its high melting point, it is also commonly used in refractory materials. It’s ideal for challenging applications where the refractory’s strength must be maintained at high temperatures. It is often used in the manufacture of glass products to increase strength; it has also been investigated for the possibility of producing unbreakable glass.

Such metastable phases of alumina (or Aluminium oxide) include the cubic γ and η phases, the monoclinic θ phase, the hexagonal χ phase, the orthorhombic κ phase, and the δ phase that can be tetragonal or orthorhombic. Each one has a distinct crystal structure as well as properties. Cubic γ-Al2O3 has important technical applications. Activated aluminas of amorphous type, as well as the transition aluminas of γ, η, χ, and ρ forms, are obtained from various aluminum hydroxides, such as, α- and β-trihydrates, α-monohydrate, and alumina gel. The Bayer process can also be used to produce certain chemicals from bauxite.

Alumina is commonly used in mining and earthmoving and exploration as a material transfer factor. These mechanical properties have also been found to be useful in the armor plating of military vehicles and personnel. Alumina is also often used in high-temperature and corrosive processing settings, such as kilns and furnaces on difficult manufacturing lines. The structure of molten alumina is temperature dependent, and during cooling (and supercooling), the fraction of 5- and 6-fold aluminium increases at the expense of tetrahedral AlO4 units, resembling the local structural arrangements found in amorphous alumina.

By changing the reactants in the manufacturing process, alumina can be treated with different properties. Alumina comes in a variety of grain sizes, and it has increasingly replaced emery in abrasive applications. Engineered ceramics, also known as advanced or scientific ceramics, use alumina extensively. These engineered ceramic materials are designed for particularly demanding applications that require improved wear resistance, thermal and chemical stability, and a variety of other alumina properties. Over 90% of the aluminium oxide (or alumina) produced, commonly referred to as Smelter Grade Alumina (SGA), is used in the Hall–Héroult process to produce aluminum. The remainder, known as specialty alumina, is used in a wide range of applications due to its inertness, temperature tolerance, and electrical resistance.