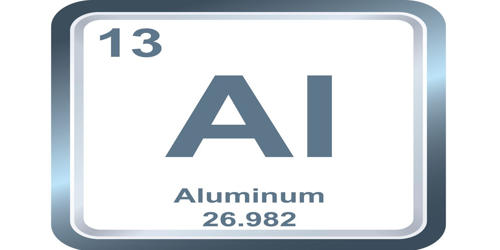 Aluminium is a chemical element with the symbol Al and atomic number 13. It is a lightweight, silvery-white metal of main Group 13 (IIIa, or boron group) of the periodic table. It is a silvery-white, soft, non-magnetic, and ductile metal in the boron group. It has a dull silvery appearance, because of a thin layer of oxidation that forms quickly when it is exposed to air. It is the most abundant metallic element in Earth’s crust and the most widely used nonferrous metal. By mass, aluminium makes up about 8% of the Earth’s crust, where it is the third most abundant element (after oxygen and silicon) and also the most abundant metal.

The occurrence of aluminium decreases in the Earth’s mantle below, however. It occurs in igneous rocks chiefly as aluminosilicates in feldspars, feldspathoids, and micas; in the soil derived from them as clay; and upon further weathering as bauxite and iron-rich laterite. The chief ore of aluminium is bauxite. Aluminium metal is highly reactive, such that native specimens are rare and limited to extreme reducing environments. Instead, it is found combined in over 270 different minerals. It has only one naturally occurring isotope, aluminium-27, which is not radioactive.

Aluminium is remarkable for its low density and its ability to resist corrosion through the phenomenon of passivation. It has a melting point of 660°C (1,220°F) and a boiling point of 2,327-2,450°C (4,221-4,442°F). The density is 2.708 grams per cubic centimeter. Aluminium and its alloys are vital to the aerospace industry and important in transportation and building industries, such as building facades and window frames. The oxides and sulfates are the most useful compounds of aluminium.

Aluminium is used in a huge variety of products including cans, foils, kitchen utensils, window frames, beer kegs and aeroplane parts. Today, it is the most widely used metal in the world after iron.

Despite its prevalence in the environment, no known form of life uses aluminium salts metabolically, but aluminium is well tolerated by plants and animals. Because of these salts’ abundance, the potential for a biological role for them is of continuing interest, and studies continue.

Aluminium is a good electrical conductor and is often used in electrical transmission lines. It is cheaper than copper and weight for weight is almost twice as good a conductor. It is used in the manufacture of automobiles, packaging materials, electrical equipment, machinery, and building construction.