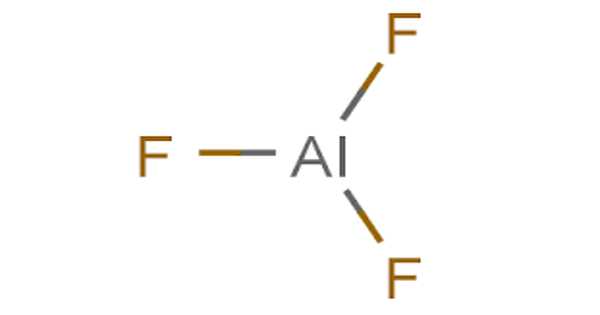 Inorganic compounds with the formula AlF3•xH2O are referred to as aluminium fluoride. This takes the form of odorless white powder or granules. All of them are colorless solids. Aluminium metal is produced using anhydrous AlF3. It is used in the manufacturing of fluorine-containing chemicals such as fluorocarbons used as refrigerants or polymers such as chlorofluorocarbons and their substitutes, and polymers such as Teflon, aluminum fluoride, sodium fluoride, and other fluoride salts. Several are found as minerals.

Aluminum fluoride is a critical raw material that is primarily produced through reactions of aluminum trihydrate with fluorspar or fluosilicic acid. Aside from anhydrous AlF3, several hydrates have been identified. These compounds have the formula AlF3•xH2O and include a monohydrate (x = 1), two polymorphs of the trihydrate (x = 3), a hexahydrate (x = 6), and a nonahydrate (x = 9).

It can also be produced through the thermal decomposition of ammonium hexafluoroaluminate. AlF3 can also be prepared on a small scale in the laboratory by treating aluminium hydroxide or aluminium metal with hydrogen fluoride.

Rosenbergite, a rare mineral, contains aluminium fluoride trihydrate. The anhydrous form is known as óskarssonite, a mineral that was only recently recognized (as of 2020). Zharchikhite, Al(OH)2F, is a related but extremely rare mineral.

Anhydrous AlF3 adopts the rhenium trioxide motif, with distorted AlF6 octahedra, according to X-ray crystallography. Each fluoride has two Al centers connected to it. AlF3 has a high melting point due to its three-dimensional polymeric structure. In the solid-state, the other trihalides of aluminum have different structures: AlCl3 has a layer structure, whereas AlBr3 and AlI3 are molecular dimers. They also have low melting points and easily evaporate to form dimers. Aluminium fluoride exists in the gas phase as trigonal molecules with D3h symmetry. This gaseous molecule’s Al–F bond lengths are 163 pm.

Aluminium fluoride is a critical additive in the electrolysis production of aluminum. It lowers the melting point to below 1000°C when combined with cryolite and increases the solution’s conductivity. Aluminium oxide is dissolved in this molten salt and electrolyzed to produce bulk Al metal.

Aluminum fluoride complexes are used in biology to study the mechanistic aspects of phosphoryl transfer reactions, which are critical to cells because phosphoric acid anhydrides such as ATP and GTP control the majority of the reactions involved in metabolism, growth, and differentiation. The discovery that aluminum fluoride can bind to and activate heterotrimeric G proteins has proven useful for studying G protein activation in vivo, elucidating the three-dimensional structures of several GTPases, and comprehending the biochemical mechanism of GTP hydrolysis, including the role of GTPase-activating proteins.

Aluminium fluoride (AlF3) is a free-flowing white powder that is primarily used as an additive in the production of primary aluminum metal. The addition of aluminum fluoride to the raw materials used in the aluminum smelting process lowers the temperature and improves the conductivity of the molten bath, lowering the amount of electricity consumed. Aluminium fluoride has a wide range of applications in the chemical industry, including: